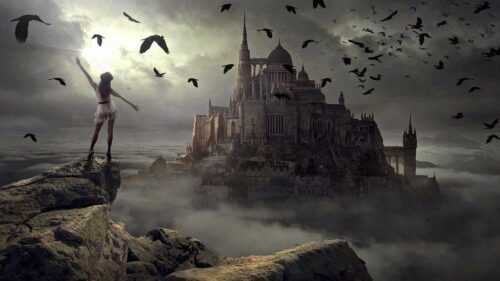 Most Mysterious Places of Ukraine

Most Mysterious Places of Ukraine, Ukraine is a country with a thousand-year history which can surprise not only with extraordinary landscapes but also with terrible places shrouded in mysticism and secrets.

Most residents of Ukraine do not even suspect the existence of such places, and those who have visited them tell frightening stories.

We offer you to get acquainted with the most mystical and terrible places in Ukraine. You can try to take a chance and solve their riddles if they are not scary!

Where: the city of Mukachevo, Transcarpathia region.

Most Mysterious Places of Ukraine, Palanok Castle, is one of the most mystical places in the Transcarpathia region. Moreover, it is well-liked by many tourists.

It is located on a mountain of volcanic origin and has a vibrant history – the first mention of this castle dates back to the 11th century.

And under its walls are branched underground passages, some of which lead miles away. Also, on the castle’s territory, there is a water well 32 meters deep connected with the Uzh River. According to legend, this well was built with the help of black magic.

According to one of the hundreds of legends about the Palanok Castle, the daughter of his master, a Hungarian girl, fell in love with a Pole trying to take possession of the castle. You can also read Tunnel of love, Ukraine.

Thus, she told him about some secret passages. The owner of the castle was angry and ordered to more his daughter alive on one of the castle walls. Now her ghost is looking for a way out of immurement, crying and calling her loved one.

No less terrible, and besides, a purely Carpathian legend, tells about the cruel countess who lived here. To preserve her youth, she took baths filled with the blood of the young girls she had abducted in neighbouring villages.

The captives languished in the dungeon of the castle, waiting for their terrible fate. Since then, the souls of tortured girls know no peace and traipse about the castle building.

In 1782, the castle became a political prison. Transcarpathia was then a part of Austria-Hungary. Executioners tortured prisoners in these dungeons for over a century.

Now, there is an exposition of torture instruments that you can see. Even if you do not believe in evil spirits, the castle will amaze you with beautiful legends interspersed with horrifying historical facts. You can also read Mysterious Snake Island in Brazil.

Abandoned Hospital Over the Cemetery

Most Mysterious Places of Ukraine, In the city of Dnipro, there is an abandoned Red Cross hospital. They say that Satanists gather here and perform their rituals.

Sometimes, local people notice lights in the hospital windows, although there has not been electricity for a long time.

This medical institution was opened in 1910 as a hospice. But the treatment methods at the beginning of the last century were not as good as they are now, and many doctors could not help their patients.

The mortality rate in the hospital was about 80%. Enraged citizens tried to storm the hospital three years after the opening, claiming doctors were killing their patients here.

In Soviet times, regular repairs were made here, but the walls still cracked, and the roof leaked. They say that the repairmen were afraid to go down below stairs because they saw luminous balls above their heads, and sometimes it seemed to them that the stairs were breaking down under their feet.

Later, historians discovered that the hospital stands on an old 15th-century cemetery – it existed when there was no city. You can also read Mysterious Places in Australia.

They also say that there is an extensive labyrinth under the building, and one may find the corpses of some hospital patients there. This place is generally unpleasant but attractive, as it often happens with derelict buildings.

This is one of the most mystical places in Kiev. Lysa Hora is a gathering spot of the evil spirit. The hill is associated with the legend of the serpent, which wraps around the Earth and bites itself. The place where it bites itself is called Lysa Hora.

In the old days, there was a pagan spiritual altar and a temple in Lysa Hora. After planting Christianity in Kievan Rus, supporters of paganism gathered here.

At the end of the 19th century, the Lysohorsky fort was turned into a post-stockade where they carried out terrible executions.

Kievans advise keeping away from this forested area. Those who still walk here tell about the feeling of discomfort. Some people get the impression that someone is watching them. The military who served here often witnessed paranormal events; some lost their minds.

Where: the village of Pidhirtsi, Lviv region

Most Mysterious Places of Ukraine, The castle has a terrible secret. Everyone who spent the night here from the 18th century to nowadays saw a real ghost at night! It was a woman with a black face dressed in white clothing.

The ghost was seen by patients and the workers of the tuberculosis sanatorium in Soviet times. The family of Polish landowners who lived in the castle even wrote down their memories of the ghost.

According to legend, the soul of the murdered young wife of Vaclav Zhevutsky wanders through the castle. Because of jealousy, he killed the young lover and mured her body in the walls of the castle. You can also read Top 10 Mysterious Places on Earth.

Where: the city of Kremenets, Ternopil region

Most Mysterious Places of Ukraine, The ruins of the former princely fortress, still stand on Bona Hill.

The mountain’s name is associated with the beautiful Italian Queen Bona Sforza. But because of her excessive cruelty, she is often credited with demonic acts.

According to legend, the beautiful queen made a deal with the devil, and he promised to give her eternal youth and beauty. But to obtain it, the queen had to sacrifice virgins.

They were thrown from the top of the castle onto sharp piles. Moreover, Bona took cooling baths with the blood of the girls. According to another version of the legend, the queen’s bath was made from the blood of infants.

Most Mysterious Places of Ukraine, The Green Theater is a huge building with underground passages and tunnels. During its history, the theater survived a stroke of lightning and fire. Moreover, it constantly attracted disadvantaged groups of society.

A theater was built near the cemetery of suicides and dead babies. In Soviet times, criminals often left dead bodies here. There are legends that the Green Theater has been a center of underground communications since the founding of Kiev.

Also, there is an opinion that Bulgakov liked to walk here. In a word, the place is mystical and has a lot of legends.

The House of the Witch

Where: the village of Usatovo, Odessa region.

Most Mysterious Places of Ukraine, In the village of Usatovo, there is a strange house known to almost all Odesa residents. Among the older generation, there is a legend that the house was built by an old sailor who gave in the will to bury him here.

After his death, the owner was walled up in the house’s foundation. And now, people hear strange weeping near the house.

According to another version of the legend, there was a guillotine in the place of the ill-fated house. Sometime after, they built a house where a wicked witch settled down. After her death, no one wanted to bury the woman, so her body was mured in the territory of the house.

When her son returned from abroad, he was told that his mother was buried in a rural cemetery. The witch’s son decided to stay in the house and restore it. But for some reason, he could not live there and quickly quitted the house.

One way or another, the house is notorious. No one lives even in the neighbourhood with it. And the locals claim that at night, strange sounds are often heard from the side of the witch’s house. You can also read the Most Mysterious Island in India.

Most Mysterious Places of Ukraine, Against the walls of this castle, the ghost of a monk appears from time to time. There is a legend that the monk loved carnal delights and often visited women from nearby villages during his life.

For this, the monk was punished and mured in one of the walls without food and water. According to another version, the wandering monk Jan Casper jumped into the deep well in front of the eyes of thousands of pilgrims.

Other monks declared him crazy but still buried him based on the Christian canons. However, the soul of the man still does not know peace.

You can also read Top 10 Mysterious places in the UK.

Where: the village of Somin, Volyn region.

Most Mysterious Places of Ukraine, The lake is located in the middle of a forest two kilometres away from the village. People are afraid to swim in it. Fish doesn’t take the bait, and birds do not sing here.

And all this is because of the monster that lives in the lake. The last time, a creature with a snake’s head and the body of a crocodile was seen 30 years ago.

You can also read Top 10 Haunted Places in India.

According to a legend, an ancient giant catfish lives in the lake. According to another version, this is a prehistoric shark. In any circumstance, this mystical place attracts hundreds of extreme sports enthusiasts every summer.

Portal to Another World

Where: the village of Berezhnitsa, Ivano-Frankivsk region

Most Mysterious Places of Ukraine, Outwardly, the small village of Berezhnitsa is no different from hundreds of the same tiny villages throughout Ukraine. But near the village, there is a mystical mountain ridge called Sinitsa.

Old people believe that there is an entrance to another world; young people call it a portal to another world. A thick fog overhung the Sinitsa ridge even in the brightest and sunny weather.

During World War II, the Nazis organized a scientific expedition to the Sinitsa ridge – they were looking for the portal quite seriously.

They say they even performed rituals and offered animals in sacrifice. But no portal was found. However, residents advise steering clear of this mysterious mountain. You can also read Khooni Nadi Rohini Most Haunted Places in New Delhi.