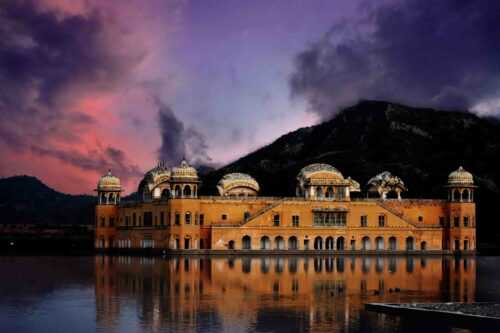 Jal Mahal has always been favourite amongst tourists. It is the most famous tourist spot in Jaipur because of its unique architectural structure.

It derived the title ‘Jal mahal’ since the palace situated in the middle of the lake, and a large part of the major deluged underwater, hence the name, “Jal Mahal.”

Although it was never confirmed as to when precisely this palace built, it reckoned that the castle was expanded and renovated by the ruler of amber Maharaja Jai Singh II in the 18th century while others stated that it was constructed by then amber ruler, Madho Singh in 1799.

In 1596 A.D there were no permanent lakes, the lands would fill with water during rainy seasons. When famine hit the region and left the people devastated, Maharaja Man Singh I, the then ruler of the area, decided to construct a dam to preserve water which would be useful in times of need for the people.

The architectural structure is the combination of Rajputana and Mughal styles which makes it the most beautiful architectural palace.

Jal Mahal can also be called as an ancient ruin from history because it is 255 years old and it is a five-story building, out of which four floors rest under the water when the lake is full of water, making the top-level visible only.

It is said to be the place for the royal families for organizing feasts and shooting ducks for enjoyment.

Every archway, doorway, the balcony of the Mahal exhibits an elegant carving that fascinates the tourists with their exquisite wealth.

The palace’s terrace has a landscaped garden with curved passageways and four beautifully decorated pavilions on the four sides.

Jal Mahal gives you that enchanting view of the Man Sagar Lake and the Nahargarh hills that cover the area.

The actual beauty of the palace came to life when the whole complex washed up in floodlights. The palace shine like a diamond fitted in the beautiful Aravalli valley.

However, the tourists still can view the enchanting palace from Amer road (Amber Fort) and click photographs of the beauty.

The guides will entertain you with his narration about the history and construction of the palace along with some other interesting facts and details.

The Jal Mahal suffered waterlogging in the past years and also developed cracked in the structure.

Upon noticing the situation, the state government of Rajasthan initiated an extensive restoration project in 2001 that involved afforestation programs, diverting the direction of the drainage system, restoration of the cracks and fractures in the structure of Jal mahal.

October to march considered the best time to experience the beauty of Jal Mahal or Man Sagar lake.

References What to know before you go