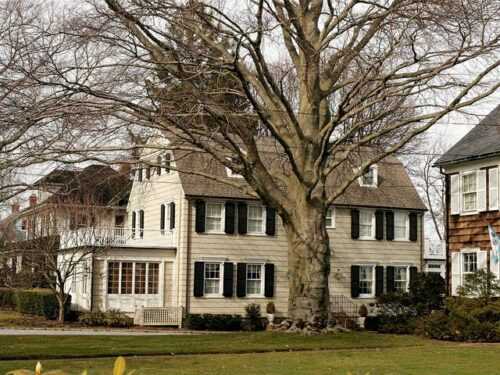 Well, we today will take you to the most frightening paranormal reports. It has given America as the most haunted house with its reputation, the Amityville House.

The house situates at around thirty miles away from New York City. It locates in the long Island town Amityville.

The home has forever linked to the Amityville Horror phenomenon. Well, it is because of a mass murder seen on November 13, 1974.

It is a story of a young boy who was 23 years old named Ronald J. DeFeo Jr.

He killed his whole family when the members were sleeping including his four siblings and his parents.

After thirteen months, a new family, Lutz purchased the same house which has five bedrooms along with 3.5 bathrooms.

The price of the home has drastically reduced to $80,000, and it was all due to murders. But it lasted only for the next 28 days before leaving.

Well, since the boy murdered his family, there are spine-tingling tales that prevail for its paranormal activities all around the world.

Now the house has attained the name of “America’s Haunted House.” Also, you will find it in the number of books, films, and documentaries.

The house of Amityville locates at 112 Ocean Avenue, and it has been the largest house in the suburban neighbourhood of Amityville.

It situates on the south of the shore of the Long Island of New York City. The House has been in a conviction of the second-degree murder in the November 1975.

In the next year December 1975, the family of George and Kathy Lutz along with his three children entered the house, but due to the experience of some paranormal activities, they left home only after 28 days.

It is a book that has the basis of the real story which describes the story of 112 Ocean Avenue for remaining empty for the next thirteen months of the death.

The book is by the American author name Jay Anson. It got published in September 1977.

Also, it has become the basis of film releasing that took from 1979 onwards.

The book describes the experiences of the paranormal activities that the Lutz family has experienced, but then it has even led to many controversies and lawsuits over the truthfulness.

The horror house has five bedrooms along with one swimming pool and one boathouse which locates on the canal.

George and Kathy wanted to start fresh with their property and a new life after marriage. So they shifted to the place, but unfortunately, they had to leave it.

When the family was moving to their new house, a Catholic priest came up to bless their new home.

Also, after the search for paranormal activities, many people came up with investigation purposes. After the investigation, the face of the priest was never disclosed.

Well, the father has shared the history of the dabbling in the occult. Lutz used to wake up at 3:15 am.

It was the right time for the occurrence of paranormal activities. Also, it was the same time when the twenty-three years old boy murdered his whole family.

Also, Lutz have experienced a strange smell every time. Also, I have seen many cold spots in the specific areas of the house.

Also, when a priest came to bless the family to live, there was an unusual voice that asked the priest to “Get Out.”

Also, the sound had never let the family sleep appropriately in a particular house.

Also, the nearby garage used to get open and close which was by an invisible spirit who was knocking the knife down from the window.

The official sale of the house The Amityville was in February 2017 to an anonymous owner of the house to around $605,000.

The price was less than the original one for approximately $200,000 less.

Previously, the owners were the four other families after the murders. One owner of them has changed his address and shifted to 108 Ocean Avenue. Originally the house was at 112 Ocean Avenue.

Well, all these supernatural stories of the house along with those rumors of the ghost have come up these days in such a case that people were afraid to buy it. But eventually, the house has found its owner.

Now media is waiting for the new news to come up for the home which they can showcase to the people as before.

There are many more reasons for the people to leave the place which is still not out. Also, the priest who came to bless was not out to show up his face.

The movie Amityville Death House is the 2015 direct video horror film which considers its base as a novel of 1977 The Amityville Horror.

There is nothing to do with the event shared in the book. It has only used the location and the DeFeo murders and the place 112 Ocean Avenue which acts as the plot point.

The director of the film is Mark Polonia who is one of the Polonia brothers. The film has the unknown cast.

The film has turned to be the twelfth movie based on the novel Amityville Horror novel.

Well, the stories, the paranormal activities, and the horror of the house have urged people to buy horror books and films which explain the real story of the house. There are a lot of people looking for the same.

Also, the urge to buy is so much that things are not going cheap instead of the murderous story of the house which was done by a 23 years old boy of his entire family.

Only after some time, if a family comes to buy the house, they had to leave it unfortunately because of fear and scary sites they experience in the home.

The place is large with a big boathouse and consists of the two car garage with the boat slip. Also, it has a tremendous criminal past.

Media is still looking for the ghost stories to be out through the people who have left the place or those who are living inside. Now the unwanted activities have made people scared.

They have shared the experience, and also they believe in the fact that the boy is responsible for everything that is happening presently there.

He has done a crime, and the punishment is still given to his the soul of his family and the people who try to live inside. It has turned them to think upon the matter.