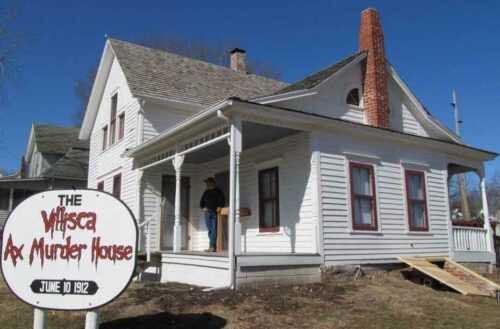 In this small town, on the residential street, there is an old white frame Villisca Axe Murder House.

In the absence of lights on a dark evening with the fear sounds is the first indication to the visitors that there is something different with this house from the others near it.

If you notice this house very deeply, you will see the doors and windows of the house are tightly closed and covered.

An Outhouse in the backyard of the home suggests that it does not occupy a place in the 21st century, but in any way, this house belongs to another era.

It is the “Murder House.” There is a weather-beaten sign that is hanging from the old front porch that warns us rather than welcomes.

There seemed to be no more shortage of suspects while no one ever convicted of the Villisca Axe Murder house.

Many people believe Frank F. Jones who was a prominent Villisca resident and Iowa State Senator; he was responsible for the brutal deaths of the Moore’s and the Stillinger children.

Since the house has got opened to the public, it has been host to the school groups from across the west as well as interested individuals in history.

These individuals were a crime or those who are not ready to tackle the house after dark.

We will turn over the key and the head on the home after a walk-thru tour of the house and its grounds. We can tour overnights by reservation only.

We suggest you limit your group of max — ten people for an overnight tour. To get a comfortable sleep in the house, bring your sleeping bags, and pillows with you.

There is a barn a few feet from the house which has a restroom, water, and electricity. Bring a blanket and heavy coat if it is spring or early fall.

Depending on the weather, the Villisca Axe Murder House has a little heat. The price for an overnight tour is minimum of $428 which allows one to six guests.

This price also includes sales tax. There is an additional $75 for another guest. The infamous Villisca ax murders were depicted in 2 feature movies- “A historical true-crime documentary” and “living with a mystery.”

It is the thirteenth episode of Season four of Ghost Adventures. The crew of ghost adventures investigates a Lowa home where six children and two parents that were all asleep got brutally murdered with an Axe in the early morning hours on 10th June 1912.

The essential suspects are State Senator Frank Jones, Reverend George Kelly, and Andy Sawyer who were known for being a peeping tom.

They were at the church the last time when the victims were seen alive. A homeless man made crazed mutterings on June 18th, 1912. He muttered about Andy to his employer.

He has witnessed Andy when saying that she will cut all yer god d**n heads off. At the same time, she made vicious striking motions.

Andy also slept with his axe. When Reverend Kelly was in the court, he has also confessed to the murders. The jury did not believe his confession.

In our opinion, this house is not now, nor it has ever got a haunted place.

After spending dozens of hours filming in this house for the documentary for many hours of the day and the night, we have no paranormal experience to report anything.

Moreover, we have interviewed and received so many emails from every former resident of the house between 1936 and 1993. All the interviewers and emails say that the house got not haunted.

My friends and neighbors thought that it is a bit spooky to live in the murder house. The residents near the home found their fears somewhat amusing.

From the year 1936-1942, Berdine Miller lived in the murder house with her family. Her mother sold Avon, and her father was a night watchman.

They paid $8 as the rent of the house per month. We interviewed her in the year 1994 about sharing her experience living in the haunted house.

It is a coincidence that this house became the haunted house in the wake of the popularity of The Sixth Sense. The Sixth Sense is a movie that we enjoyed as fiction.

A wave of media followed the announcement that the Villisca house got haunted and much press reported it as disturbed without any evidence, reference and context in the historical records.

The frightening thing about Villisca Axe murders house is the notion that someone could enter home and murder you and your family and your guests while you are asleep.

You have to lock down your Saturdays with the fearless team from Travel Channel’s show “Ghost Adventures.” The show is returning for a spine-chilling twelfth season.

Zak begins and Aaron Goodwin, paranormal investigators, alongside AV techs Billy Tolley and Jay Weasley travels every haunted location in each episode where they encounter locals, experts, and eyewitnesses to piece together the haunted history of each site.

These paranormals then begin a dusk-to-dawn “lockdown” investigation.

They did it by using the latest scientific gadgets and technology to confront the reported activity and document key evidence to uncover the truth behind each mystery of the house.