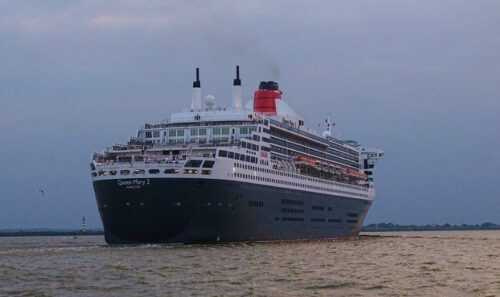 Queen Mary The Most Haunted Ship

The Queen Mary ship has once again opened its popular room, which is widely famous for its hauntings, room B340.

This popular cabin has recorded a significant number of paranormal activities along with several stories of haunted meetings taped in the Queen Mary ship’s records.

The history of the Queen Mary ascertains many lives lost on the ship. In 1939, when World War II began, queen Mary transformed into a transport ship.

It carried allied troops and named it ‘the grey ghost.’ During the war, Queen Mary moved 800,000 troops to Europe; in 1942, as she was sailing with 10,000 soldiers, she rammed with her companion, the HMS Curacao.

It ripped the ship in half. Since the enemies were nearby and the fear of them attacking at any time was there, there was no way but to leave queen Mary with 239 crew in the middle of the sea.

The queen Mary gradually lost its popularity due to the progression in air travel and retired by 1967.

At present, the Queen Mary is now, treated as a hotel and a museum, permanently berthed in long beach, California.

Over the years, the staff and visitors started reporting bizarre instances with ghosts and terrifying sounds coming out of the ship.

Chilling screams and brutal noises are described in the boiler room. It is said that an 18-year-old sailor was trapped and amputated by a heavy door in half.

A ghost of a young girl reported being haunting the ship, as well. Reportedly, she played hide and seek with the guests in the empty swimming pool.

The ship’s salon is also said to be a haunted one as many stated of encountering several paranormal activities with a Woman in White.

She is believed to be a first-class passenger and glides through the floor whilst dancing to a silent orchestra wearing a long gown.

It is said that several spirits are attached to their personal belongings lingering on the ship.

The notorious B deck where the infamous room B-340 is, once comprised of the third class compartment. Now it is used as guest rooms for the visitors who plan to stay overnight in the Queen Mary hotel.

With 314 first class-cabin and 13 suites, the most popular of them all is the b-340. The room B-340 was a three third-class berth, and now it is renovated into one massive suite.

Even though the room doesn’t seem to be of any luxury, it still proffers basic furnishings with a simple design and two small windows.

Queen Mary prohibited accepting any guests to this room due to several complaints that the room was haunted.

Instances like footsteps, toilet flushing on their own, faucets turning on and off themselves were some common complaints.

Various companies tried to save the failing business by converting it into a luxury hotel, however, couldn’t. Now, the new workers of the ship are trying to get the most out of its haunted reputation.

Thanks to its increased demand with the guest yearning to experience the night in room B-340, they determined to charge the room for reservation at $499 per night.

Above all, the guests would be offered an Ouija board, tarot cards, a crystal ball, and some ghost hunting instruments.

On the bathroom wall, there’s writing explaining how to summon Bloody Mary.

A ghost is said to appear in the mirror upon chanting her name three times whilst facing the mirror.

It is said that during the time of the 70s and 80s, when the ship was newly launched, some of the paranormal activity was so negative that the guests were forced to leave the ship.

The paranormal encounters started from minor instances- comprising hearing knocking sounds on the floor or walls during night-time, faucets turning on themselves, and the bathroom door squeaking from side to side- to personal experiences consisting of seeing a figure coming up of the bed, hearing ghostly voices endeavoring to involve in a conversation with the people in the room.

The Queen Mary ship’s captain, Everett Howard, stated that when he enters the B-340, he senses vertigo, and every so often has to leave the room before he starts to have that sick feeling.

Since she tormented several Protestants all through her reign, 100s of them burnt to death. Hence, the name ‘Bloody Mary.’

The reason why there’s confusion is that they both were Catholic and many deaths took place during each of their reigns.

Mary, Queen of Scots, known as Mary Stuart. Regardless of her name ‘queen of scot’ she spent half of her life in Sheffield.

She became queen when she was just six days old, right after her father King James V died in 1542.

As Queen Mary Stuart was too young to rule the country, her family sent her to France for her education in a luxurious French court.

From an early age, Mary’s marital prospects were already on everyone’s mind. First Mary married Francis, the son of King Henry II in 1558; Francis ascended the throne one year later and died one year after that.

Leaving Mary widowed at just 18 years. Mary loved her husband dearly and hence. It was a huge loss for her. However, it was determined that it would be best for her if she returns to Scotland, which she did in 1561.

Mary met her cousin Henry Stuart in 1561 when she was still coping with her husband’s loss. She decided to marry him as according to her he was the best proportionate long man she’d ever met.

However, she soon found out he is nothing that she anticipated of him; he turned out to be arrogant, vain, and an angry drunkard.

When she became pregnant, he accused her of adultery with his secretary David Rousseau.

In 1566, Stuart along with a group of Protestant nobles murdered David, stabbing him 56 times in front of Mary who was six months pregnant.

Albeit, less than a year later, Stuart died, as well, blown up in a mysterious explosion. The suspicion naturally drifted toward Mary and her closest ally James Hepburn.

He was put under trial for Stuart’s murder, however, acquitted. Soon, afterward, rumors started to fly that James would marry the Queen.

How would it have happened you ask?

He kidnapped her. Allegedly, Mary was en route to Edinburgh when Lord Bothwell (James Hepburn) showed up with 800 of his soldiers.

He captured her willingly or unwillingly. He took her to Dunbar where he raped her. Back then it was a common way to ensure a woman would marry you was to rape her.

This would make her dishonored, and she would leave with no other choice than to marry the man who raped her in order to save her dignity.

Queen Mary and Lord Bothwell got married in 1567. Soon, many start questioning the marriage and raised several controversies.

Catholics saw marriage as unlawful. Scotland was divided; Scottish nobles rose up against her and Bothwell and imprisoned her in Loch Leven castle.

She had to abandon her throne to her one-year-old son James. In 1568, she escaped the palace, attempted an uprising that failed, fled to England, and asked her cousin, Queen Elizabeth, I to assist her to regain the throne.

However, Elizabeth, fearful of the Catholics, who saw Mary as the rightful heir of the throne and considering Mary’s lousy reputation, made the decision to imprison Mary instead for 18 years.

How did Mary Queen of Scots Die?

In 1586, Mary was held responsible for plotting to assassinate Elizabeth I. She was put on trial and found guilty of treason for which the punishment was death. She was beheaded in Fotheringhay Castle in 1587.

Mary was quite a gifted child and mastered many skills. She was excellent in poetry, languages, falconry, prose, and horsemanship.

Since her demise, several attempts made in order to make her a Catholic saint.

However, the only detail that was deterring that from happening is the corroboration of the fact whether she killed her second husband or not. Since a murderess cannot be a saint.

One of the most astonishing facts of all is- Queen Mary and Elizabeth I never met face to face. Elizabeth sent a delegate to Mary’s son’s baptism.

Regardless of Elizabeth’s promises to visit Mary in prison, she always managed to not. She didn’t even attend Mary’s funeral. Instead, she sent Countess of Bedford in her place.

Mysterious Or Haunted Places Where To Travel

Most Mysterious Island in India (Updated 2022)