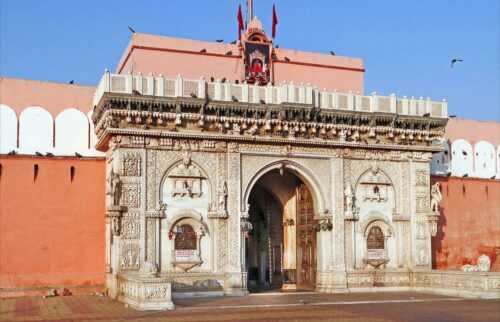 Bikaner district of Rajasthan, which is famous for camel safaris and the fort has a unique temple in the town of Deshnok that is a major attraction to tourists.

It was built in 15th – 20th century by Maharaja Ganga Singh.

Karni Mata temple, Bikaner is famous for 25,000 black rats. These holy rats are called ‘Kabbas,’ while some are white rats.

Many people travel great distances to their respect for these long-tailed rodents. The temple attracts visitors from across the country.

Historians have contrary views about the story of rat temple in Rajasthan.

Some historians believe that Laxman, son of Karni Mata, drowned in a pond in Kapil Sarovar in Kolayat while drinking water.

Karni Mata implored Yama, the god of death to revive his son. Yama relented reincarnating Laxman and all sons of Karni Mata as rats.

While some historians believe that Karni Mata belonged to Charin clan, after her lifespan of 150 years, she became rat after her death.

This cycle continues. Charin people think that these rats of the fascinating stop in India are their ancestors.

It is considered auspicious to have rats scuttle over feet. Eating food nibbled on by rats considered to be of high honor.

It is said that if one of the rats is killed, it is to be replaced by one made of solid silver.

White rats are considered to be especially holy, believed to be manifestations of Karni Mata and her sons.

Sighting them is a special blessing, and pilgrims put extra effort to bring them forth, offering Prasad.

Worshippers make pilgrimages to freakiest attraction not only to worship but also heal their ailment.

Rat temple, in its present form, was completed in the early 20th century in late Mughal style by Maharaja Ganga Singh of Bikaner.

There is a beautiful marble facade in front of the temple with solid silver doors.

Across the doorway are more silver doors with panels depicting various deities. The image of Karni Mata is enshrined in the inner sanctum.

Worship – Karni Mata temple Deshnok is open to the public early in the morning at 4:00. Mangla Arti is performed by Charan priests and offers Bhog.

Devotees make offerings to auspicious rats that roam in the temple in large numbers. Two kinds of offerings are made to Karni Mata:

Dwar bhent – Attributed to priests and workers and,

At this time, many people travel to the temple on foot.

The interesting fact about Karni Mata Temple is that these rats never leave the temple even though they are free to do so.

You have to enter the temple barefoot and walk through a lot of rat poo.

A documentary was shot by Morgan Spurlock Named ‘rats ‘in 2016. India’s strangest attraction appeared on the American reality show ‘The Amazing Race. ‘

There are plenty of ways to reach Bikaner Karni Mata rat temples such as public buses which charge Rs.20 approximately and camel ride for Rs. 200 per person, camel man, provides an excellent guide and a stop at a camel farm.

2 thoughts on “Karni Mata: A Temple of Rats in Bikaner Rajasthan, India”