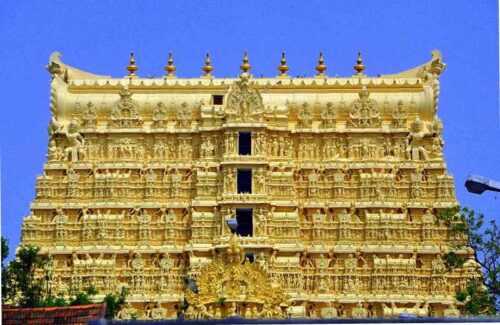 India has a rich history and glory in temples constructed in ancient times. Kerala, located in southern peninsular India, is known for its divine spirit and faith.

It seems that every state in India has a mysterious place to call its own.  There stands a tall temple in Kerala’s capital, the Mother of all super nature sites, Sree Padmanabhaswamy temple.

Thiruvananthapuram means “the city of Lord Ananta “referring to the deity of Padmanabhaswamy temple.

This gold plated glory is one of the 108 Divya Desams, the principal centers of worship of Vaishnava religion, Lord Vishnu’s followers.

The temple was built in an intricate fusion of Kerala architecture and Kovil style, also known as the Tamil style of architecture featuring high walls and a gopuram.

Architecturally, the temple is a replica of the Adikesava Perumal temple located in Thiruvattar, Kanyakumari district.

The Supreme principal deity, Maha Vishnu, is enshrined in Anantha Shayanam’s posture. The yogic sleep on the serpent Adisheshan, which adds to the grandeur of the temple.

The shrine is one of the most revered abodes of Hindu deity because Maha Vishnu resides with a lotus attached by its stem to the Lord’s navel and the Lord’s right hand placed over a Shiva Linga.

Lord Brahma sits on a perfect flower.  The deity was made of 12,008 Saligramams, brought from the banks of Gandaki River in Nepal.

Two consorts of Sri Vishnu, Sridevi Laxmi, the goddess of prosperity, and Bhudevi, the earth’s goddess, sighed in the sanctum.

Sree Padmanabhaswamy is a deity of the royal family of Travancore.

This abode of holiness is one of few temples in India where entry is permitted to only those who worship the Hindu faith.

Devotees have to follow the dress code strictly. Padmanabhaswamy temple dress code is sarees, mundu set, half saree, skirt and blouse for women and gowns for young girls below 12.

Men are required to wear dhoti or mundu or go bare in the torso.  Dhotis are available on rent near the temple. However, these days, there is a bit of exemption to avoid inconvenience to devotees.

The underbelly of Sri Padmanabhaswamy temple is home to a mystery-ridden chamber with a majorly spooky history that leaves you awestruck in its magnanimous beauty. The divinity par excellence will surely stake your senses.

Padmanabhaswamy temple was built in the 6th century AD and later modified after ten centuries by rulers of Travancore, who are believed to be descendants of Saint Kulasekara Alwar.

Hindu mythologies like Brahma Purana, Matsya Purana, Mahabharata mentioned the shrine of Sri Padmanabhaswamy temple, and in recorded Sangam literature, it has been referred to several times.

Many historians believe that “the golden temple” comply that temple was unimaginably wealthy by that point.

9th century Sangam literature and poet-saints refer to the temple and city having golden walls.

At some places, the entire town eulogized as made of gold and temple as heaven. The temple is glorified in Divya Prabandha.

The temple and its assets belong to Lord Padmanabhaswamy and, for a long time, was controlled by a trust headed by the Travancore royal family, which the Supreme Court has divested of India.

In 2011, retired IPS officer Sundarajan filed a petition in Supreme Court to take stock of the temple’s unknown treasure.

The Supreme Court-appointed the committee of seven members to open the secret chambers to make an official record of it and reveal the Padmanabhaswamy temple secrets.

Association discovered six hitherto known as vaults or Kallaras labelled as A, B, C, D, E and F.

The doors were made of iron, which took the utmost toil to open the chambers, and what they reported was beyond human imagination.

Padmanabhaswamy temple secret doors had wealth more than the GDP of some countries. (3 and a half feet golden idol of Maha Vishnu, studded with hundreds of diamonds and other precious stones.  Tons of gold were also found).

While vault B, known as Bharatakkon Kallara, remains unopened. Vault B Padmanabhaswamy temple mystery is an accurate example of ‘some things cannot be solved.’

Vault B is believed to be deeply rooted. It is believed that Devas and sages devoted to Lord Balarama reside in K B worshipping the Lord.

A four-day “Asthamangala Devaprasnam” performed in August 2011 declared chamber B of Padmanabhaswamy temple as a forbidden zone.

Lord Igra Narasimha of Thekkedom is said to be the protector of vault B.

Vedic scholars and priests believe that any attempt to unlock the vault will bring misfortune.

The untimely death of Sundarajan strengthened the stated belief, the petitioner, after a month, the doors were opened.

Another observer lost his mother as a curse.  In 1930, a gang of temple invaders tried to siphon off the treasure of vault B, failed in the mission because numerous snakes came in their way.

Chamber B is made impenetrable by Naga Paasam Mantra, which was used to lock the portals during King Marthanda Varma’s reign.

Only a high calibre saint is capable of removing Naga Paasam by correctly chanting Garuda Mantra.

Two antechambers are guarding the entrance of vault B. The final door is secured by humongous serpents, the deities enchanting and female vampires, and other supernatural entities.

Padmanabhaswamy temple vault B snake indicates danger to whoever opens it.

Around 100 years ago, when the area was grappling with a severe famine,  temple authorities tried to open the chamber,  buy heard the sound of gushing ocean waves from behind the door.

Since then, it is believed that the chamber is connected to the Arabian Sea, and any further attempts will unleash catastrophe across the state.

The mystery of Padmanabaswamy temple is yet to be revealed.

The temple consists of six Vaults from which one of the vaults is Vault B which cannot be opened by anyone but can be opened out with human-made things with Chanting’s presence.

The two vaults get opened on daily routines, and two others get opened after every six months, and the left two are found to be secret vault from which vault b was opened on the sixth of December in 1931 with the help of a key used over the rusty locks.

During the time of opening, the Maharaja was himself present over the area.

The temple consists of the rules which should get followed strictly, and one of the rue gets based on the dress code that Devotees should accompany.

As many devotees gather among themselves to have a glimpse of the deity.

So, people should not wear any pants or Salwars under the temple. Near the temple site, many shops provide clothes for rent, so people take clothes on lease and wear them during their visit.

So, the Padmanabhaswamy temple is visited throughout the world by people, but the people who wanted to visit Archana have to take cards to visit it.

If people don’t want to visit the Archana, then tickets are not compulsory so, if someone forces you to buy them then don’t.

The temple stands itself in the place Thiruvananthapuram which gets situated in Kerala.

The temple is divine and gets visited by many people worldwide, but it consists of some of the conditions that should be followed, and then this temple can get freely visited.

People should visit the place with clear thoughts and a pure heart. This temple blesses you with many blessings and fulfills your wishes if they get made with a pure mind.

The time required for visiting the entire temple is around two to three hours in a day.

It gets said that the temple is the wealthiest temple in the world which consists of much treasure which is worshipped by the people all around the world.

It got estimated that the value of the Monument is ranging around 1.2 lakh crore.

Also, it is found that it consists of a pure Throne made up of golden which gets embedded with lots of diamonds and many other stones which are very precious.

It gets also recorded that at least three of Gold’s crowns are also present, which also consist of diamonds and gems.

It was even reported that some pure Chairs of gold with thousands of gold pots and jars are located. So, it became the richest temple in the world.

It is found to be the cheapest way to reach the Padmanabhaswamy Temple from Bangalore.

People travel by taking a plane or bus, train, and Car. The selection of the method depends on the family condition that they would prefer.

In the case of the flight, The Air India Limited or Indigo Airlines are used to fly over the area every four hours.

Also, an alternative method is to prefer red bus which could get received in ten minutes. The tickets cost about 600 to 850 rupees, and also the journey takes up to twelve hours.

It also prefers four ways that are plane or bus or car or train, and it depends on the person that they prefer.

It is also considered to be the cheapest way to be visited the Padmanabhaswamy Temple.

It takes thirteen hours for Redbus to visit the Padmanabhaswamy Temple and the range of cost varies the same around 850.

Also, the plane can be preferred which makes the person visit very early.

The person can select the option around bus or train or plane or car to attend the Padmanabhaswamy Temple from Mumbai.

The time taken from Mumbai is comparatively more than Chennai and Bangalore. The bus traveling takes up about 1700 to 2400 rupees, and even the journey is very long of 31 hours.

The Padmanabhaswamy Temple is 1240 km distant from Hyderabad, and also, the traveling can get done with all the ways by train, car, bus, or plane.

Travelling by bus can take around 21 hours a day and travelling cost range by 950 rupees.

The Padmanabhaswamy Temple could be visited from the Kanyakumari by three of its ways as by train or taxi, or car.

Is Padmanabhaswamy Temple Under Devaswom Board

The Government of Kerala has approved as well cleared that the court is not going to mule the takeover of the temple Padmanabhaswamy which is considered to be under the Travancore Royal House.

The Government also includes in its statement that on the Monday with all following private petitions with the seeking takeover of the state of its grand temple with its entire individual jewels and also the movable properties.

Even the request has also soughed the restrained entering in the inner chambers, consisting of all precious as well rare jewels with gold vessels.

So, this was all about the Padmanabhaswamy Temple and kept you update with reading!