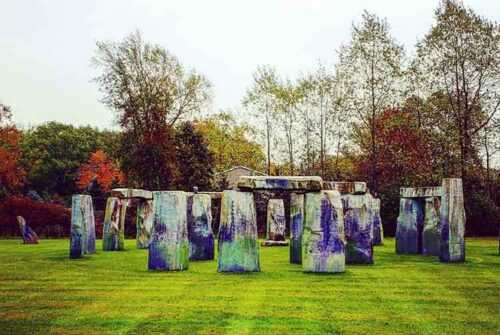 Discovering a building underwater would seem highly unlikely; however, there have been numerous stories that relate to this concept- the concept of finding a lost city under the water. Similarly, scientists have discovered a structure pertaining to Stonehenge at the base of Lake Michigan.

The Lake Michigan Stonehenge story is not new, and only a few people have the gist of this story since the story is underrated that nobody has many ideas about it.

However, the origin of these rocks is still unknown. Though they do take a form of a perfect geometric shape, they are not connected in the same way. So, even if it’s human-made, who would have built it? And, why?

In 2007, Mark Holley, professor of underwater archaeology at Northwestern Michigan University found a site 40 feet below the surface of Lake Michigan Stonehenge. The Grand Traverse Bay Underwater preserve is located there.

Mark along with his colleague Brain Abbol discovered the site after traveling over the lake in a ship that was equipped with sonar equipment, which usually used to survey old shipwrecks.

As they were passing thru, they found a series of stones that stimulated their interest. When they sent some divers underneath the sea look more and clicked some photographs, they ended up getting disappointed instead.

Holley stated that the stones looked scary when they saw it in the water. The whole place is creepy, scary as when you are swimming through a row of stones, and the rest of the lake is empty, it is frightening.

One of the boulder photographs taken at the Lake Michigan location is presumed to feature an ancient engraving of a mastodon- an animal that is presumably extinct 10,000 years ago.

Researchers have asked for more substantial proof so that they could validate the markings as a prehistoric petroglyph. Unfortunately, the boulder is beneath the water, and petroglyph experts aren’t much of skilled divers.

Holley expects that a computer model of the monument in the mastodon rock would assist petroglyph experts in deciding whether the features were naturally carved or they were carved during ancient times.

Skeptical Charles Cleland, retired curator of Great lakes archaeology and ethnology at Michigan State University, asserts that petroglyphs are uncommon in the Upper Midwest, however, they have seen them. Even though he is skeptical, he does believe in the investigation.

There have been more than 100 cities underneath the Mediterranean Sea registered alone, and several others at the base of the oceans. As per the geographical background, the inundated site would have been tundra when the nomadic (who lived mainly by hunting) traveled in 6000-9000 years ago.

The question is- is it possible that the stones emerged from huge fishing dike placed over a river that’s gone a long time ago? Or they were a ceremonial location? Where did all the water come from that shrouded the Lake Michigan Stonehenge submerged structures? No one knows

It is an intriguing concept if we think over it a bit- less than 5 % of the water of the ocean has been studied, and only 5 % of the sea had been recorded.

If we keep thinking about this, it is quite extraordinary when you think through what the world’s oceans enfold about 70% of the earth’s surface. We have so many things to uncover!

Experts suggest that if the scientists would prove that the boulders are astronomically lined up, the beaver island could depict one of the most important discoveries of ancient landmarks in North America. Since such headstones hadn’t been known to exist at the north

The circle of stones discovered by Teri Bussey of the Grand Rapids in 1985. Archaeologist for the Michilimackinac State Park, Donald Heldman stated that he is confident the rocks were situated in their positions by humans.

However, he said initially he was dubious when he heard about the stones. He was stressed thinking more research would need in order to conclude the purpose of the arrangement. Furthermore, all of the explanations are mere guesswork.

Experts with uncertainty dated the construction of the boulder ring to around 1,000 years ago. Scientists stated Beaver Island, located in northern Lake Michigan away from the ports of Charlevoix and Petoskey, might have been used as a way station for southern Indians employed in the north copper trade.

Some posited that the boulder rings were used in navigation concerned with that trade. Bussey, Heldman, and island heads had been unwilling to argue the discovery until they found out that the monument is at risk by real estate construction.

They all agree to the fact that exigency, in order to make the discovery known to the world, so that extensive research could be created since the construction of 600 subdivision, is organized near the circle.

Developers have concurred not to put the site any harm if the landmark is proven to be a historical significance. Britain’s Atlantis- aka the lost city situated in the North Sea has been founded by divers working with science groups from the University of St Andrews.

A large area of dry land that extended from Scotland Denmark- Doggerland, slowly inundated by water amid 18,000 BC and 5,500 BC.

Divers have discovered from oil companies the remnants of ‘submerged world’ with inhabitants of 10,000. This may have been the ‘core’ of Whole Europe.

Group of skilled archaeologists, geophysicists, and climatologists has recorder the site now, using new information from oil industries, and exposed the whole scope of a lost land once traveled by mammoths.