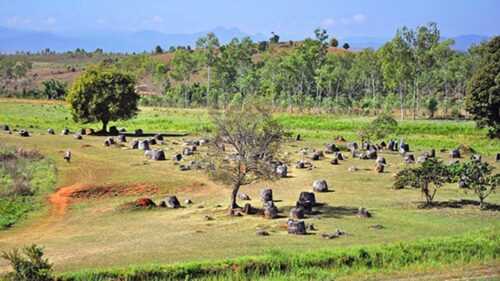 The plain of jars located in central Laos is one of the most mysterious places and misinterpreted ancient places in Southeast Asia.

About 90 spots dispersed over miles of rolling view comprise tons of massive stone jars that weighs quite a lot of tons.

Regardless of the archaeologists’ effort in order to bring out the reason behind the mystery of the plain of Jars is still a mystery.

The atmosphere around the plain of jars is spooky and dull, similar to what Easter Island and Stonehenge have.

These unfathomable jars signify that some things are way beyond than humans’ understanding.

There’s one gigantic jar situated nearby to town, visited by tourists in a flock, only to see its humanly carved structure with knees bent and arms pointing towards the sky.

Where is the Plain of Jars located?

The plain of jars is located in Laos which is a megalithic archaeological site.

However, the culture is unclear that thoroughly sculpted the plain of jars.

French archaeologists Madeleine Colan performed research in 1930 in the vicinity of the plain of jars and found teeth, bones, pottery ruins, and drips.

Any further excavation barred in the area of the jars until 1994 when Professor Eiji Nitta performed more research there.

Due to the billions of unexploded objects lying in the surrounding area of the Plain of jar the process of excavation has gotten slow and unsafe.

Several jars broke or got knocked over by forced waves affected by the intense bombing in the war.

Site 1 is the most visited site situated in the town of Phonsavan. It is a must-see for experiencing the only jar that’s decorated.

Laos anticipate turning the plain of jars into a UNESCO world Heritage once the risk of unexploded objects is reduced.

Since the jars have lip borders, it is assumed that all of them were initially shrouded with lids and even though some were recorded it is more probable that the main object used was bamboo or wood.

Presently, these jars are still a mystery like before and even manage to spawn debate and argument.

There are more than 90 jar sites that are recognized in Xiangkhouang jurisdiction.

Each site comprises 400 stone jars, and the jars differ in height and diameter amid 1m and 3m and all of them are shaped from a rock.

The rocks are in the shape of cylindrical and the bottom is broader than the top.

The plains of jars are undecorated except for one, ‘site 1.’ It is like a human frogman sculpture shaped on the outside.

Because most of the rocks have lip edges, it is believed that they initially maintained lids, though there were few stones with lids found.

This might insinuate that the majority of lids were carved from fragile materials.

Animal carving on stone lids has been discovered at some sites such as site 52 (Ban Phakeo.) The sculptures are believed to portray tigers, monkeys, and frogs.

Plain of Jars site 2 or Hai Hin Salato is situated 20km southwest of Phonsavanh. It has 93 jars dispersed around two adjacent hills.

A tiny robbed stupa could be visited in the east, on the west, a stone shaped as, possibly a human frogman could be found.

The plain of jars of Laos is one of the most perplexing sights in the world. The eerie sight of tons of megalithic stone jars dispersed over around 100 locations hidden in the mountains of northern Laos has intrigued scientists and archaeologists since its discovery in 1930.

The legends have it that the jars were built by a tribe of giants. Their king needed a place to store his rice wine.

They used to drink the wine when they celebrated an imminent military victory thousands of years ago.

There was an evil king named Chao Angka who exploited his people so badly that they pleaded to another king who was good by nature.

He was khunJeuam, and the people begged him to liberate them from him. The king went with his army to the site and fought with Chao Angka and defeated him.

Whereas some still believed that the ginormous jars were used to save the monsoon rainwater, most archaeologists considered that the jars were put in use as burial containers.

Diggings done by Lao and Japanese archaeologists in the succeeding years has backed this theory with the discovery of burial objects, remains of human, and pottery around the jars.

Another theory suggests that the jars were used to accumulate rainwater in the course of the monsoon period.

It is assumed that the jars were used to put the corpses of the people who were left to rot. It was a practice that is common in Laos and Thailand.

Allegedly they would leave the bodies in the jars for the tissues to decompose and the body to dry out before their cremation.

After their cremation, they would put the ashes inside the pot, or maybe buried those in holy ground, releasing the jars for re-use in order to rot another body.

Archaeologists still trying to figure out the reasons behind its formation, however, as aforementioned, the process is slow due to the unexplosive objects in the plain of jars.

Moreover, the site has been declared as the most dangerous place on earth.

The land is under threat due to this reason and continues to jeopardize the lives of more than 200,000 people who live in Xieng Khouang presently.