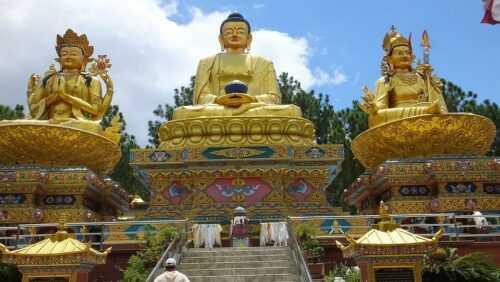 Swayambhunath Stupa is a World Heritage site which is a blend of beliefs and customs of the Hindus and Tibetans.

Swayambhunath temple is the most favourite depiction of Nepal in all ways. I planned to visit there.

As I love to travel in the car, so I went by road in my car. It was a very chaotic experience by car. Only a few people obey the traffic rules in Nepal.

I was offered a motorcycle to hire in Kathmandu, but I preferred the car. There are two routes to go to Kathmandu.

One route is to the Terai via the Prithvi Highway to Pokhara. This route connects to the main highway at Mugling.

However, for the scenic alternatives, The Tribhuvan highway follows the winding path from the hills via Daman which links through to Birgunj.

Another route is the Arniko highway which runs to the Tibetan border at Kodari. This route is the main route which connects and Nepal and Tibet.

However, the road was damaged by the earthquakes of 2015. On the roadway, there are high chances of landslides.

Swayambhu, the Buddhist temple is situated on the top of the hill west of Kathmandu. This temple is the most famous temple and recognizable symbol of Nepal.

People call this temple as “Monkey Temple.”This temple has been in use since the fifth century A.D.

This temple is the oldest temple of Nepal which I have visited on foot through 365 steep steps from the eastern side of the hill.

There is one more way to visit the temple that is from the west side. From this side, you have to climb only a few stairs.

As I have chosen the way of 365 stairs so, I went through it. This way runs through the entire forest and is highly populated with monkeys.

The temple remains open for the whole day.

So, I have decided to spend more time of mine in this temple to explore it thoroughly I have paid Rs200/- as the entry ticket to enter the Swayambhunath temple.

I visited the temple around 10:00 am. However, you need only two hours to explore the Swayambhunath temple, but I have spent 4 hours in the temple.

There are a variety of temples and shrines, and also there is a domed stupa.

Every temple at Swayambhunath is highly decorated with gold and prayer flags. This decoration is not only the one factor that attracts lots of visitors.

Swayambhunath Temple is a sacred pilgrimage which draws various faithful every year.

This temple is also home to several monkeys. These monkeys are considered to be sacred and holy to both Tibetan Buddhists and Hindus.

The stupa at the temple is an impressive golden spire which is crowning a wooded hill.

This stupa is a white dome with a golden spire which I have seen from all the sides of the valley.

Along with this temple, I have also visited a Tibetan monastery, library, and museum, which have been added this year to attract more and more visitors.

I have seen that; there are Torans in the shape of pentagons are present above all the sides of Buddha with the statues engraved in all of them.

When to visit the Swayambhunath Temple?

I have visited there on the weekend. At that time, the temple was packed with lots of people. There was a huge crowd of people in and around the temple.

It also happens at the time of the Losar festival, which is held between the months of February and March, the Buddha Jayanti.

Lots of people visit the temple during these festivals because these are big and famous festivals and there is a big crowd in the temple.

We also call this temple a monkey temple. This temple is a famous tourist attraction in Kathmandu.

This temple is perched on the top of hills west of Kathmandu from that hill, and you can see splendid views of the entire city.

People used to call the temple as monkey temple due to the presence of sacred monkeys all around the temple.

I got to know that the area around this temple has a Tibetan name which means stately trees. It is because of the lots of assortment of trees on that hill.

Swayambhunath Temple is the oldest and holy temple of Kathmandu.

This temple is the famous destination for Buddhist pilgrimages, and also this temple is a very important place for the religious adventures for tourists.

What to see in the Temple?

Swayambhunath Temple is a Buddhist temple. Also, the Hindus visit here frequently. Here at the temple, The Harati Devi Temple is famous for Hindu pilgrimages.

There are many other famous and sacred temples and sanctuaries all around the Swayambhunath temple.

I visited all these temples and sanctuaries and had enjoyed a lot there. I have also visited the Shantipur temple, which is not far away from this temple.

I got to know about a fascinating fact of this temple that a holy man has been sitting inside the Shantipur temple for around 1500 years.

I got to know the fascinating stories about surrounding temples and attractions of Swayambhunath Temple. There are lots of myths about this temple.

These myths start from the Bodhisattva Manjushri for draining a lake and the magical appearance of Swayambhunath Stupa to the Mughals invading the temple’ stupa for the gold and many more.

This thing is very popular among foreign visitors, especially for the Buddhist people because this temple is a holy place of Buddhists.

I have reached there by the private valley from the centre of the Kathmandu valley. I arrived there within 20-30 minutes.

Sightseeing was included in my travel package along with Boudhanath Stupa, Kathmandu Durbar Square, Pashupatinath Temple, and Swayambhunath Temple.

Tips for Travelling to Swayambhunath Temple

I recommend everyone to travel to Kathmandu for Swayambhunath Temple. The people living in Kathmandu are Buddhist.

That is why Swayambhunath Temple is a famous holy place in Kathmandu, Nepal.

You can also visit the nearby places to Swayambhunath Temple in Nepal to enjoy the scenic view of the entire city.

Some famous Nearby Attractions from Swayambhunath Temple are:

Why is Swayambhunath Temple famous?

This stupa is the oldest in Nepal and has numerous shrines and monasteries on its premises.

Why is Swayambhunath temple called the monkey temple?

It is said that it came into being when the Buddhist Deity Manjushri spent time on the hill where the temple is set.

Which temple is the biggest temple in Nepal?

The biggest temple of Nepal is “Nyatapola Temple”.

At what height is Swayambhunath Temple?