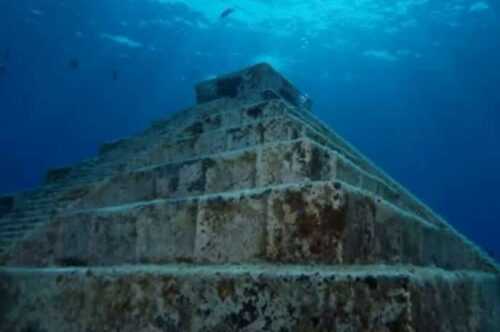 Roughly 25m underneath the waters of Japan lies an underwater rock pyramid. No one knows who constructed it and when; however, it exists, accessible to anyone who wishes to go down and investigate. It is known as Yonaguni Monument.

The Japanese archipelago extends for almost 4,000 Km-from Kamchatka Peninsula to the island of Taiwan in China.

The Yonaguni island is situated at southwestern’s furthest tip which Japan’s most western point, and only 100Km away from Taiwan.

It is pretty diminutive with a population of only 1700 inhabitants; however, it is popular for the hammerhead sharks.

Numerous hammerhead sharks could be found in its water, and they are omnipresent.

It makes the divers from all over the world to come over here and swim with these sharks. Things are usually found underneath the water.

The Yonaguni Monument japan was discovered as a part of those ‘many things’ found ‘usually’ by the Yonaguni tourism board in 1986.

Though they set out to look for the hammerhead sharks and stumbled upon the Yonuguni monument. It is widely known that Japan is the hotspot of great tectonic variability. It is located just by the junction of the Pacific plate and the Philippine Sea plate, and therefore, home to 10% of the world’s active volcanoes.

Earthquakes are something that frequently occurs here. The coated sandstone rock layer over Yonaguni is intensely fractured due to earthquakes.

A tourist delegate swam under the water, and as he passed over this piled and cracked land, he found this formation and named the territory Iseki Point/ Ruins point.

He informed the others that he found a structure that looked like a humanmade castle.

A marine geologist, Masaaki Kimura, visited the Yonaguni Monument himself and what he saw created a grave impact on him for the rest of his life.

He is the founder of Marine Science and Cultural Heritage Research Association that is ardent in order to prove that the Yonaguni Monument isn’t just an art of nature, however, a manmade formation, comprising of a massive network of buildings, monuments, castles, a stadium, and other buildings, all associated by a complex system of waterways and roads.

History channel on its history’s mysteries created an episode called Japan’s mysterious pyramid’ which encouraged the notion with a slight criticism.

Again on an episode ‘Lost Cities of the Deep’ of ancient discoveries they did the same.

The discovery & BBC channel made documentaries supporting the Yonaguni Monument’s natural past.

Conspiracy websites and forums love exaggerating such tales. Amongst the foundations recognized by Dr Kimura is one of that he has named Jacques’ eyes. He named it after Jacques Mayol who did free-diving in the spot.

It is a big round rock with two slides near where eyes may be, however, it doesn’t appear as a sculpted head, and Kimura does not believe in recognizing it as one of those.

He took a photograph of Yonaguni Monument; personally, he opposes that the eyes were cut; however, the rest of the stone is natural.

There’s an entirely different photograph circulating on the internet depicting three divers swimming over a ginormous stone head that is evidently manmade, with a feathered crown.

It doesn’t matter what the starting point of the photograph is, and it holds no similarity whatsoever to the rock at Yonaguni, regardless it is being so popular on every site.

Open sunlight is the main ingredient to Dr Kimura’s theory; the theory stated that the formation took place on dry land when ocean levels were low in the course of the last ice age.

According to him, the Yonaguni Monument was dry and low during 8-10,000 years ago; and before that, it was high and dry.

This argument is more likely to be of a greater deal for the documentary makers, who are looking for the point of dispute in order to stimulate the idea of such controversy, endeavouring to prove that the scientist is divided or arguing over this. However, they aren’t!

Some do support the theory of Kimura, however, no one is ready to validate his theory.

A geologist named Dr Robert Schoch from Boston University is the most renowned scientist that supported the opposition.

He is well known for his work on allocating Egypt’s Sphinx and Great Pyramid dates that are much primitive than previously assumed, centred on his study of endurance.

Schoch is a bit of an eccentric, and very few geologists or archaeologists have found Kimura’s images and understanding to be convincing enough to work on.

Schoch has dived under the water a few times; on the other hand, Kimura dived a hundred times.

The geologic features of the region are distinguished, and Schoch carried samples of the Yonaguni rock outside for examination.

He discovered that they were, as anticipated, sandstone and mudstone of the structure called Lower Miocene Yaeyama Group, which added up 20 million years ago.

Recently, Dr Kimura has admitted that the basic structure of the Yonaguni Monument is possibly manmade, however, stated that it had been transformed by humans, therefore concocting the particular details such as Jacques Eyes and the roads.

He has discovered and recognized what in his opinions was quarry marks and writing.

The access is thru a small tunnel via the rocks. As you come to surface from the tunnel, you’d see two massive lumps of rock, perfectly built columns, side by side, right in front of you.

After you are done exploring the monument’s platform, the dive generally ends with a swim, around the broad channel.

On the other hand, a coral ridge where you’re expected to find some moray eels and turtles.

A significant form of proof linking Yonaguni with other Paleolithic sites could be found in situ discoveries of stone bars with paleo Sanskrit scripts.

The scripts were decoded over a decade ago by linguistic and inscription expert K. Schildmann.

The paleo-Sanskrit language has been identified positively and interpreted from hieroglyphic inscriptions on stone artefact recovered by divers exploring the Yonaguni Monument.