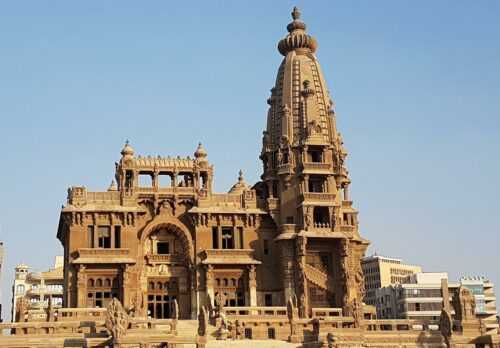 You automatically get captivated by the design of this palace when from the very minute you keep your eyes on it.

The palace Baron Empain is better known as Le Palais Hindu. It is The Hindu palace.

The castle, Baron Empain is a distinctive and historic Indian mansion in the suburb northeast of Central Cairo, Egypt.

This palace got designed by Alexandre Marcel, French architecture and Georges-Louis Claude has decorated this palace. Baron Empain Palace got built between the year 1907 and 1911.

Palace of Baron Empain, The Man, His City, and His Palace

Some Roman Emperors and some of the Great Pharaohs might have built up the cities in Baron Empain. Certainly not in recent times, it gets read that a single man was building the entire town.

It was what exactly Edouard Empain, a Belgian businessman did during the early 20th century.

He has rapidly gained a reputation for his excellent work by building rail transport systems. The company over his name has already established a presence on three continents.

One of the achievements that his company gained was the Paris Metro which got built in the year 1897.

After this achievement, he got the title of Baron that bestowed over him than King of Belgium.

His company was also active in India. When he visited India, he fell in love with the Hindu architecture.

In 1906, when he returned to Egypt, where he set up another company named the Cairo Electric Railway.

After setting up this company, he purchased 25 square kilometers of desert dunes from the British who were still ruling over Egypt.

He bought this place to turn it into a beautiful French-style urban oasis with luxurious Islamic-inspired buildings.

After seven years of it, he fulfilled his dream. He set up a beautiful city like no other city in the world.

Moreover, the Baron Empain Palace got built at its core with the abundance of beautiful relief work.

It is also believed that the iconic tower of the palace can rotate once so that The Baron Empain Palace can enjoy 360-degree views of the entire city which Empain has created.

When his family started living in the palace, soon his sister fell to death from the tower window. Moreover, later, his daughter found to have died inside the castle.

Usually, it is said that her daughter died because she committed suicide because of the physical disabilities she was wearing since her birth.

After the death of Baron in the year 1929, his palace was inherited by Baron’s son and after that his grandson.

Unfortunately, they failed to maintain that palace and fell into the state of disrepair. After many years, the Egyptian government repurchased it in the year 2005.

It was hoped that the authorities would repair the palace. After the two months being opened to the public, the castle was closed again without any explanation to anyone.

According to some people, the tower of the Palace has lost its ability to rotate at 360-degrees after the death of Baron’s wife.

The reason behind it is that Baron was very busy playing with the tower that he could not see her wife falling and was unable to rescue her. So her spirit has jammed the tower in the act of revenge.

People also speak a lot about the death of his daughter. Some people say that she died because of her physical disabilities.

He treated her harshly and kept her prisoner in the basement. What do you think? Does Baron is responsible for her daughter’s death?

People do not know much about what had happened to all of them and who was responsible for all this, but one thing always remains sure that “This palace will continue to be haunted the place and will haunt people after 100 years”.

In recent times only, the authorities have decided to renovate and restore this palace, the incredible piece of Egypt’s history.

Nobody exactly knows when this palace is going to open for the public. There are already green gardens on the grounds of Palace.

Even after a long time, the Baron Empain palace is still a recent creation for Egypt. This palace is perfect for tourist attraction.

The Baron Empain Palace is a strikingly beautiful building, and there is genuinely a remarkable history behind the Palace.

Today, the palace stands empty, amidst the upheavals of the Arab Spring. The castle attracts only superstition, rumour, and the camera lenses of the passing tourists.

The Baron Empain Palace is unlikely to take its place in the top Egypt Tour Packages until it gets open for the public.

All the Egypt travel packages at Egypt Tours Plus and including the Cairo tour packages are fully customizable.

It means that it can be easily added to the packaging of tours to visit this palace on request.