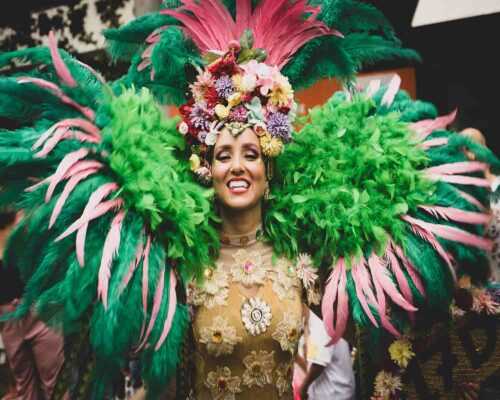 Europe has been regarded as one of the most culturally rich continents in the world with each of the countries having their share of history and heritage.

In this article, we see some of the most famous festivals that are being celebrated in Europe.

Best Festivals in Europe for tourists

The Carnival Of Venice

The Carnival of Venice is one of the most celebrated festivals in the entirety of Europe. The Carnival Of Venice goes back millennia for its origin.

Over the past couple of centuries, the tradition was not maintained.

To not lose the tradition and the rich heritage associated with the festival and to revive the culture of the city, the festival was restarted in the year 1979.

The festival is special for its celebration of masks, music, and gathering of people. A water parade is conducted to bring the people together.

There are a lot of competitions that are conducted based on the old Venetian traditions and cultures. One of the popular contests is the competition on who makes the best mask.

This sees thousands of people entering to participate in the contest. The grandest event of the festival is the grand ball which makes the city festive as no other day does. If you are in Venice around that time, be sure to check the festival out.

It is usually conducted between 16 Feb-5 Mar.

St. Patrick’s Day is one of the most celebrated festivals in Ireland and the entire country is brightly dressed up in the colors of Ireland out on the roads celebrating.

St. Patrick’s Day is celebrated on March 17th every year and the reason for the celebration being the day is known as the arrival of Christianity in Ireland.

Over the many years the St. Patrick’s Day has become a festival that has become symbolic of Ireland and its culture. The Irish green color is seen everywhere, and the Irish volunteers march in Dublin on this day. It is one of the most popular spring festivals in Europe.

This day is also regarded as the alcohol day in Ireland as the restrictions of the lentil for alcohol end on this day, allowing the Irish to go on their famous pub hopping.

The Cannes Film Festival might not be the first to come to your mind when you think of the famous festivals in Europe. Yet, it is one of the most celebrated European festivals and is also recognized all over the world.

For the uninitiated, the Cannes Film Festival is a film festival that screens some of the best movies from all over the world from that year. It is an exclusive invite-only event, yet it receives tremendous frenzy and fans following from movie buffs all over the world.

Every year the top movie stars from all over the world arrive at this small french town called Cannes. This also ensures that it brings the attention of the worldwide media to the event. Every year the best film that is screened at the festival is awarded the prestigious Palme d’Or.

This award is considered as more prestigious than even the world-famous Oscar awards by the movie purists. It can be said with surety that the Cannes Film Festival put the little french town Cannes on to the world map.

It is one of the top festivals in Europe and usually happens during September. The hub of the festival in Munich. The Oktoberfest festival is a folk celebration of Bavarian culture and was first started in 1810. The city comes to stop still as the festival commences, with food and beer stalls set up everywhere.

The Parade held in traditional costumes by the restaurateurs and riflemen is one of the highlights of the festival. Millions of people visit Munich in September every year to take part in the Oktoberfest.

The Glastonbury Festival held in Somerset England is one of the most famous music festivals in all of Europe. The music festival has been rocking since the year 1970 and has put the British pop culture on the world map.

The festival has since been seen as a perfect template for music festivals that came after the Glastonbury Festival. It is the largest greenfield music festival in the world and sees at least 2,00,000 people during every edition of the festival.

It has seen some of the most famous artists such as U2, Coldplay, and Beyonce, among others.

Maslenitsa has become one of the well known cultural festivals in Europe in recent days. This brings the Slavic tradition’s very own religious carnivals to the table.

These Carnivals are extremely vibrant and you can make friends with almost anybody during this Carnival. The Carnival takes place in the main streets and you can see people cheering in groups. This happens most often in the first or second week of March.

This is one of the oldest originated festivals in Europe and occurs 8 weeks prior to the Eastern easter. This festival is also known as Cheesefare week or the Crepe Week as the Orthodox Christians are allowed to celebrate with meat and other dairy products including Cheese.

Butter Lady and Butter week are other terms associated with this festival. You can even feel the buzz around the place even a week before the festival. The weather during this month is moderate compared to the coldest months. This makes the festival even more adorable with a different feel altogether.

Reach out to the destination experts at Pickyourtrail to customize your European vacation packages.