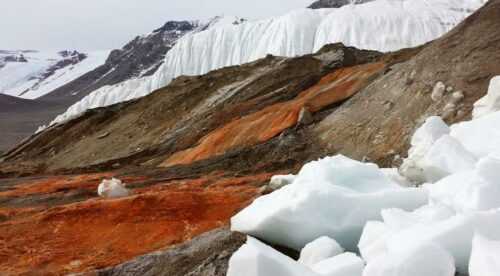 At the time, the world in which we live seems to be more grisly beyond our imagination. This happened when I first heard about an Antarctic glacier that oozes blood or something similar looking. Yes, horrifying and creepy as hell, right? Ever since this place was discovered, there are various assumptions made about the history of Blood Falls.

Various scientists tried to figure out the exact reason behind this dynamic. After many studies, researchers seem to be convinced by an idea, although it doesn’t really make the mystery any less interesting.

This Blood fall was discovered first by a person in 1911. During the time of expedition that was led by an Australian explorer named Thomas Griffith Taylor. Even though this glacier has been noticed several years before during the British National Arctic Expedition.

But was considered as a part of the Ferrar Glacier. However, the Taylor expedition actually discovered that two glaciers were joined with each other. As a result, those explorers decided to name the new one after their leader.

After a while, that same expedition had found that the glacier also seemed to ooze rust-colored water from its snout that looked like blood. Soon after all this, scientists began to search for answers that explained these unnatural bits.

How scientists solved the 100-year-old mystery of Antarctica blood falls?

This mystery of blood falls in Antarctica was explained by the University of Alaska Fairbanks. All thanks to them as the actual origin of this Blood Falls was actually disclosed. It was said the due to oxidized iron in saltwater, the color seemed as a rusty red.

As the iron in the saltwater gets mixed with the oxygen as a result of iron oxidizes. As a part of its effect, the water then takes the red color like that of blood.

The team involved in this research also transected the glacier in a mesh. All this happened with a radio-echo sounding (RES) to note the features below that glacier.

Fortunately, the brine (supersaturated) makes the river which allows seeing the stark density with RES, which is not really possible in non-saline (fresh) ice water.

The researchers also assume that this brine water must have taken approximately 1.5 million years to become a Blood Falls. This is because it comes through various fissures and channels in the glacier.

It is normal for some to initially assume that the water should be frozen in place due to a thick column of ice that covers it. But, various factors allow the water to be in the same liquid form.

Wondering what those reasons are? Well, one of the reasons is the release of the latent heat connected with the freezing water. This low amount of heat adds up to keep the water from freezing temperature. Also, the water that is super-saturated in salt requires a lower temperature to freeze than freshwater.

Later, the red color of the water was ascribed to discoloration due to red algae. However, some suggest the reason for disclosure to be something else.  Geologists have now uncovered all of those mysterious questions about ”Blood Falls.” It is located in the McMurdo Dry Valleys. You can also read The Mystery of Japan’s Yonaguni Monument.

Life at Blood Falls in Antarctica

An undiscovered reservoir of this saline liquid chemically is similar to seawater. But, this water beneath an inland Antarctic glacier appeared to support rare microbial life, especially in a place that lacked oxygen, cold, and darkness, which is against scientists’ belief.

Proper analysis and sampling of the outflow from beneath the Taylor Glacier, an outlet glacier in the McMurdo Dry valley, was done.

After which, researchers believed that it lacked enough light for making food with the photosynthesis process. So, these microbes have adapted this over a million years and wield on sulphur and iron compounds to be alive.

The microbes are remarkably similar to other natural species found in the marine environment, which helped them know that the population beneath the glacier are fragments of more populated microbes that once lived here.

All this secured off the system under a thick layer of the ice cap. This research was also published in the 17 April edition of some journal (Science related).

Although with so much buzz all around, the researches that took place answered some questions. Still many other questions about the persistence of life in such extreme conditions under glaciers.

Additional to this, those liquid lakes that trapped kilometers under the sheets of ice Antarctic were unbelievable for a scientist to support the life of those living creatures. Well, it would be right to say that such mysteries always seem to end with one question still spinning inside our heads.

People who love mysterious places just as I love to search for answers everywhere possible. It can be termed as a miracle to some extent for those living species surviving in it.

There are various interesting facts about this place. One of which is that there are some interesting explanations about how it all began.

Scientists had said that about 2 million years ago, when the Taylor glacier was approaching during the so-called Snowball Earth period, an ancient saltwater lake was right on this glacier path.

Also, scientists have been puzzled for a long time about multiple things. Firstly, the water present deep down the glacier, which is said to be almost 400 meters down, lacks external oxygen sources.

This is something that makes the condition anoxic out there. In such conditions, it is not normal for ferrous ions and sulphate ions to exist together. That makes them believe that iron and sulphur combine in biochemical cycles (which is another question to be answered).

A lot of science is yet not very clear about how all these unnatural things are existing in this one Blood Falls.

I hope this article was able to answer all those questions that many of you were looking for. In case of any question, feel free to let me know through your comments below. Thanks!