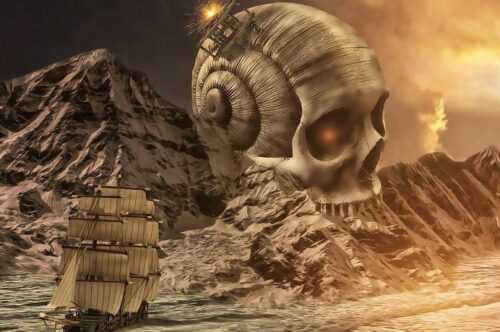 Bermuda triangle is an unusual triangular area on the Atlantic Ocean where numerous cases come forward every year concerning the disappearance.

In some instances remains of the ships could be found. However, the crew is never to be seen. And such occurrences have been going on for a decade.

More than 1000 planes and ships have been lost in the sea over the past few centuries.

In this article, the Bermuda triangle explained, or we have ‘attempted’ to provide you with all the information related to this aquatic triangle, so to speak.

Where is the Bermuda Triangle Located?

Bermuda triangle aka the Devil’s triangle or the hoodoo sea is situated in the western part of the North Atlantic Ocean.

Numerous ships & aircraft are said to have been disappeared from the site under difficult situations.

However, many renounced sourced denies the notion of any mystery of the Bermuda triangle.

The area encompassing the Bermuda triangle is the most heavily voyaged shipping tracks in the world, with ships often sailing through it for docks in Europe, America, and the Caribbean islands.

It is believed that the sinking of ships and the disappearances of people along with their ships or planes are the consequences of paranormal activity.

Surveys were done on the Bermuda triangle in order to validate the ‘paranormal activity theories’ came out to be untrue and it was stated that the crashing of the planes could be the result of a natural disaster.

Few details on the crashes are allegedly have been exaggerated by future authors.

The term Bermuda triangle was devised by a writer Vincent Gaddis in 1964 in a magazine called Argosy.

Even though Gaddis did coin the phrase, it took more than a decade for the term to be recognized around the world.

Charles Berlitz’s family, the creator of the famous succession of language instruction courses, had a firm belief in the paranormal, as well.

His theory was encouraged in dozens of magazines, books, websites and television shows.

Throughout the years, several other approaches have been proffered to justify the mystery of the triangle.

Some writers have stretched upon Berlitz’s notions about Atlantis, signifying that Atlantis might lie underneath the bottom of the Bermuda Sea and putting its crystal energies into use to sink planes and ships. Other theories comprise time travel and alien bases underwater.

Some are of the opinion that the elucidation lies in some kind of exceptionally rare and unknown-yet natural- hydrological or geological description.

For instance, sacks of combustible methane gas may be present under the sea in massive amounts, or maybe due to lightning, a giant bubble of methane came on the top right next to a ship or a plane, making them sink without a track.

However, there are few issues logically if we look into this theory carefully; methane is available all around the world and accidents happening due to such reasons is highly unlikely and has never happened, as well.

Others recommend reprobate tidal waves, or perhaps some unexplained geomagnetic irregularity that concocts navigational issues baffling the pilots and in some way triggering them to fall into the sea; the thing is, pilots are taught to fly even when they have lost direction, so this doesn’t support the ship’s vanishing.

As a matter of fact, a navy website posted an article exposing the theory; it stated that it had been incorrectly asserted that the Bermuda triangle is amongst the two places on earth upon which a magnetic compass directs in the direction of north.

Generally, a compass would lead to magnetic north; the difference between the two is called compass variation.

Albeit, previously the magnetic compass did influence the Bermuda Triangle area, as a result of the instability in the earth’s magnetic field.

So this theory doesn’t explain the disappearances, as well, because the instability in the earth’s magnetic field hasn’t occurred since the 19th century.

However, prior we are all set to accept these descriptions, someone should ask a fundamental question such as ‘is there anything mysterious to explain?’

And surprisingly, Larry Kusche, a journalist did precisely that and discovered that there isn’t any mystery about unexplained disappearances in the Bermuda triangle.

He comprehensively re-investigated and concluded that the story was developed by mistake.

In his best-selling book- The Bermuda triangle- solved’ he wrote that only a few writers made any effort on doing any real examination, most of them accumulated and repeated others, previous writers, did the same thing.

Sadly, Berlitz’s theory with language did not do an incredible job. His book on the Bermuda triangle, specifically, was perforated with mistakes, errors, and unscientific theories.

According to Kusche, Berlitz’s research was very disordered.

In some events there is no record of the planes and ships disappearances in the Bermuda triangle; these theories never existed outside of a book.

In other circumstances, the ships and planes were real; however, Berlitz and others overlooked to cite that they ‘mystifyingly disappeared’ in the course of dangerous storms.

Another time the ships sank farther outside the triangle.

Marie Celeste sailing from New York port to transport consignment to a stated destination. However, the ship never reached its destination.

After numerous search and efforts to rescue, the vessel was discovered floating in Bermuda triangle, though without its 11 crew members.

Food, personal items, containers, and lifeboats are still on the boat. There was food left on the plate in the dining room, what’s questionable is that what made the crew people leave the place all of a sudden in the middle of their dinner.

And like many cases, the ship’s radio transmitter broke without explanation midway.

What’s odder is that the captain of the ship was talking about the weather conditions and cooperative navigation, right before the radio signal got cut. It’s pretty unjust to see such a ginormous tank to end in a way like that.

The Disappearance of Flight 19

The most notorious disappearance in the Bermuda triangle is of plane 19. On 5th December 1945, five nemeses of the US navy disappeared into the air whilst working on a routine mission.

Lieutenant Charles Taylor, the squadron’s commander, was consistently in touch with the base until his frequency got lost, mid-way.

It wasn’t a signal lose, nor there’s any static signal, an only complete fissure in the link. Those five aircraft were seen again.

Above all, the rescue party that went after to recover the plane along with the troops never returned, as well.

The rescue team disappeared in a similar manner to that of the first five troops that went inside the Bermuda triangle.

After several years of investigation, the case was closed and labelled as ‘cause unknown.’

The End of US Cyclops

The USS Cyclops was a beast that was appointed by the US government in order to assist the British forces, in the course of World War I.

It started its journey in February 1918, however, couldn’t make it to its destination.

It was last seen at the coast of Barbados; rescue party was sent to look for them, though as anticipated, there was nothing to be found.

The families of the 306 crew member beginning to ask questions, the US government sent more search teams.

The government upon no pieces of evidence of the ship unveiled that there was no sudden storm, no wreckage, no SOS calls, and no part of the ship could be found.

The US government broke the news to its people with sincere sadness about the lost ship and its occupants’ demise. It was the most tragic event in the history of the US Navy.

When the families of 306 crew members started asking questions, the US government doubled its search operations.

But just when there was no hope left, the government disclosed that there were no SOS calls, no wreckages, no sudden storms, and no remains of the ship.

With genuine poignancy, the government declared the ship to be lost and its inhabitants to be dead. Needless to say, it was the most significant loss ever to the US Navy.

What makes the incident more intriguing is that two other US Ships- Proteus and Nereus had to undergo the same event in 1941. What left of the ship was nothing but just the memories.

Recent discoveries under the Bermuda triangle revealed a giant pyramid that allegedly was the reason for all the crash and disappearance of the ships and planes.

Upon further investigations, it was established that the pyramids might be the reason for the ongoing mysteriously disappearing of planes and ships. However, the purpose of the pyramids is unknown.

The mystery of the Bermuda triangle has confused scientists for years. However, one scientist thinks that he might have the answer to the Bermuda Triangle disappearances.

As per the scientists of the Southampton University, there are 1000ft rouge waves inside Bermuda triangle that may cause the ships and planes to fall inside it.

The scientists have described their lingo on a documentary called the ‘Bermuda triangle Enigma,’ where they worked on indoor emulators to concoct the rouge water run forward.

There are still some question questions regarding this alleged ‘Bermuda triangle solved’ theory.

Berlitz explained in his book that lack of logic and willingly acceptable elucidation, independent researchers regarding the loss in the Bermuda triangle have gone at a distance.

Some interpreted it to be a cause of nature, while others have suggested inter-dimensional switch via a walkaway corresponding to a hole in the sky, and some others believe beings from outer space cause the losses.

Now the thing is whether to believe all these Bermuda triangle theories or not?

Several authors have taken advantage of the triangle situation to earn money through their fictional stories.

However, it is unacceptable that a legend of such gigantic nature is only a groundless myth that persists to overcome the world for several centuries.

Regardless of comprehensive and continuous investigations, various incidents persist in stumping the researchers.

How Deep is the Bermuda Triangle?

It is pretty unclear to define as to how deep this aquatic triangle is, accurately.

The smallest area that was ever defined was 500,000 sq. Miles, on the other hand, some people consider the Bermuda triangle to be as hefty as 1.5million sq. Miles.

No one could imagine surviving the Bermuda triangle. However, there is this one guy who had to undergo such a horrific experience.

Walt Wyatt, an employee of Enterprise, sustained a traumatic experience at sea after his plane crashed into the sea, on the West of the Bermuda triangle.

Wyatt started in his twin-engine aircraft from Nassau to Miami, a trip he risked making without his flight tools that got stolen.

After getting a positive signal regarding the weather from the weather forecaster in Nassau, he used a compass to direct himself to Miami.

Not long after, the fuel in the plane’s tank started running out, and his plane began to fall making him fall into the ocean.

He hit his head on the dashboard leaving a cut. Soon, sea leeches started biting his leg and inexplicable sounds and sights coming from the sea.

After several hours, floating in the water, he heard a Coast guard plane fly above. He started waving his hands in the air, leaving him with curiosity if they can see him or not.

The Coast guard plane already had their flare dropped into the water; however, Wyatt’s eyes were so puffy he couldn’t see anything.

After half an hour or so, a ship pulled him up, and he was finally saved.

On examining Wyatt’s plane, the team discovered that the plane was acting as a sandbank, proffering home for the sea creatures that generally find shelter in a natural way.

2 thoughts on “The Mystery of the Bermuda Triangle Solved: Stories, Theory, Images”