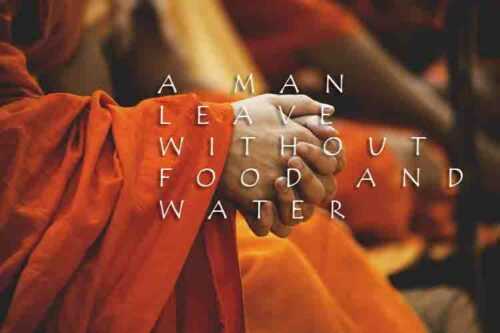 Yogi Prahlad Jani- Indian breatharian (leave without food and water)
Can you imagine being away from water and food for a day?

I suppose not. But do you know, There’s a guy in India named Yogi Prahlad Jani also known as Chunriwala Mataji.

He is born on 13 August 1929, who claims to have been living without any source of food or liquid in his mouth for 70 years.

But what is the reason behind such an incredible account?

People worship him as a “Holy Man.”

According to Prahlad Jani, at the age of 7, he had a vision and had a bite of food and water ever since.

He further stated that on the 8th day of Navratri 3 goddesses (Ma Kali, Ma Lakshmi, and Ma Saraswati) appeared to him and offered him to follow them, upon him asking about food, the goddesses placed a finger on his lips and asked him not to worry about food and water ever again.

‘Mataji‘; Prahlad Jani was under observational studies two times. One in the year 2003 and 2010.

In the year 2003, Prahlad Jani was under strict observation by the Indian Defence Institute of Physiology and Allied Science (DIPAS).

His body was strictly observed for ten days by a team of medical doctors and scientists as well, led by Dr. Sudhir Shah. He had no access to food and water and monitored 24×7.

Every possible clinical test was done on him including CT- scan and daily blood counts, but the results came out.

This incident shook every scientist and doctors as the experiment done with him was far from any scientific understanding.

According to Dr. Urman Dhruv, Prahlad Jani did not consume anything from his mouth, neither food nor any liquid and did not pass urine or stool during those 10 days of observation.

Prahlad Jani explained how he is still in a good health condition; he said he gets his nourishment from a medium that produced from the roof in his mouth.

The substance that gives him the nourishment to live known as Amrit, it’s a Sanskrit word that means without death.

In 2010 Mr. Jani was again under observatory surveillance in the sterling hospital which was again led by Dr. Sudhir Shah along with 35
Medical experts but this time the Indian Defence Institute (DIPAS) was the exclusive authority.

DIPAS director stated that Prahlad yogi’s alleged power could be of some benefit to humanity as well as to the soldiers and astronauts who have to go on without food and water for a long time.

The observation continued for 15 days, and during those remarks, he did not eat, drink or went to the toilet and all the medical tests came out normal.

According to medical experts, the only time Prahlad yogi made any form of contact with liquid was during gargling, bathing starting on the 5th day of observation.

The toilet in Prahlad’s room was sealed to gather any evidence of his affirmation that he did not need to excrete.

In Jani’s report, it has mentioned that although there has been
some fluctuation in the amount of liquid in his bladder that made him able to generate urine in his bladder, he did not pass urine.

Many experts made several reactions to the study of Prahlad Jani.

One of the expert peter Clifton, nutrition researcher, even accused the research team of “cheating” and said that a human would die without water in 15 to 20 days period if he weighs average to the human body.

According to the American Dietetic Association’s spokesperson, it’s even dangerous to fast for more than a day.

To function, one needs to have food. Sanal Edamaraku described the experiment as a travesty for allowing Jani to move out of the sealed room for sunbathing and receiving his devotees as claimed in the video footage.

He further stated that the gargling and sunbathing activities monitored inadequately.

He denied access to the location where the tests were being held in both 2003 and 2010 which led to an accusation by Edamaraku that Jani’s influential protectors were responsible for denying him permission to examine the whole operation, despite having an invitation to join the operation during the live television broadcast.

According to James Randi, a retired stage magician made an argumentative video about Prahlad Jani’s. Though Randi’s video based on his disbelief, it did not have any valid arguments.

According to Randi, he believed Jani’s case to be a fake one, Mr. Jani could have had water while bathing.

But little did he know that Jani was not allowed to take bath during the first week of the test.

Nevertheless, according to medical experts, if you go without drinking and urination for a week it would point out to some bad outcome, and you would be expected to die by autointoxication with uremic waste products.

In September 2010, it was being announced by Dr. Shah that scientists from Austria and Germany showed interest in visiting India to practice further research on Prahlad Jani, and scientists from the United States would also join the study. As far as Mr. Jani’s concern, the team has his consent for further investigation.