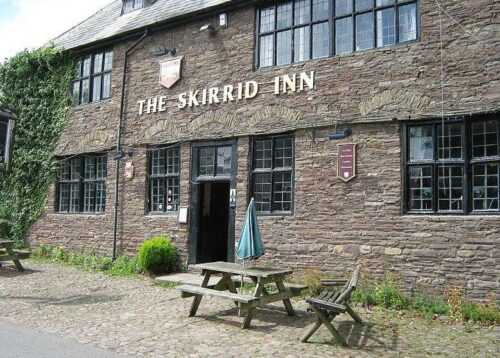 The Skirrid mountain inn known as the oldest pub in Wales, with over 900 years of ruthless execution, suffering, and witchcraft, it is no shock why this place holds a haunting reputation.

It was first mentioned in documents in 1110, round the time of the Norman Conquest.

The pub used to entertain several Kings from both England and Wales, who used the archaic mounting stone in the courtyard to alight their horse.

People believe that the Skirrid mountain inn was the very place where the Welsh ruler Owain Glyndwr started his revolt against England and Henry IV.

The dying and wounded soldiers would go back to the S mountain inn after fighting the battle.

The reason why Skirrid mountain inn is famous is due to its connections to the malevolent and notorious Judge Jeffreys, known as the hanging judge.

Albeit, none could prove the existence of such Phenomenon; it is either lost or never existed.

However, the local legend says that he sat on the judgment at S mountain inn.

The first floor of the inn through a period of several periods used as a court of law and as numerous as 180 prisoners sentenced to death in the 17th century.

The punishment took place inside the Skirrid mountain inn wales itself and above the staircase filled with darkness, a 900-year-old sunbeam exists right outside the courtroom, which depicts the blots from the hangman’s rope.

Is the S Mountain Inn haunted?

Inside the Skirrid mountain inn, ghost hunters often visited and featured in certain TC shows such as ‘Extreme ghost stories’ and ‘Most Haunted.’

Staffs working in the inn have asserted hearing ghostly f and guffawing laughter.

The former landlady of the S mountain inn reported that she has often seen a scary shadow walking up the stairs and near the corridor.

Many have reported sniffing perfumes from an unidentified source, hearing the swooshing sound of woman’s dress, and soldiers trooping. They could be the troops of Owen Glyndwr.

When the former landlady heather grant decided to put the inn for sale in the year 2002, she stated the BBC that the glasses started flying in the air without explanation in the kitchen.

She further claimed that a lot of paranormal activity has happened since the time she moves in.

She confessed that when she first moved in she was horror-struck of the things happening in the inn.

A woman in the courtyard reportedly seen on many occasions. The ghost of a sheep rustler known as John Crowther also haunts the place. He was pronounced guilty of his crime and put to death.

Several people reported of ghosts sighting in the pub, including the ghost of a local priest, allegedly known as Father Henry Vaughn.

The most active space of the Skirrid mountain inn is the guest rooms. Reportedly, room no. 3 haunted by the spirit of Fanny Price who worked in the inn during the 18th century.

She died at the age of 35 fighting tuberculosis.