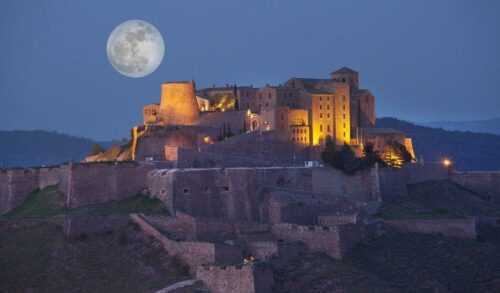 Parador of Cardona is perhaps the most significant ancient fortress in Catalonia.

It is located on top of a hill, running the river valley of the Cardener and the town of Cardona. Originally the fort was constructed by Wilfred the ‘Hairy’ in 886.

History of Parador of Cardona

The Parador of Cardona castle comprising both Gothic and Romanesque design.

The dukes of Cardona, in the 14th century, came from the most imperative family of the crown of Aragon, which was second to the royal house only.

Owing to this reason, they were known as ‘Kings without Crowns,’ as they had vast territories in Catalonia, Valencia, and Aragon, and sovereignties with Portugal, Sicily, Castile, and Naples, enhancing the significance of the fortress.

In 1714, after a Bourbon siege demolished half part of the castle’s walls, the garrison was one of the last to yield to the Bourbon armies that followed Philip V.

At present, Parador of Cardona fortress’s central gem is the Torre de la Minyona- a tower that evaluates 15 m in height and 10 m in diameter.

Furthermore, the Romanesque church of San Vicente de Cardona is situated right next to the Parador of Cardona.

This might seem very intriguing; however, this is not the reason why we are here with this article today.

At present, it is transformed into an extravagance hotel run by Paradores- a public R & R company, and reportedly a haven for ghosts.

It doesn’t matter if you believe in paranormal activities or not, visiting the Parador of Caradona would blow your mind; not due to the legend, however because of its scene in a magnificent castle on the top of a cliff.

100 km from Barcelona, this is one of the most striking hotels in the whole Paradores of Spain system.

This 9th-century armoured complex highlights the Minyona Tower, as well, and a church, both belonging to the 11th century.

Parador of Cardona proffers impressive views of the Cardener Rivers and the Saline Valley which is known as the home to one of the world’s most crucial potassium salt mines. Albeit it is not active currently.

The Parador de Cardona and the room 712

Parador Cardona 712 haunted room– Many people have stated that an individual has to be either very brave or a non-believer in paranormal stuff to be able to at room no. 712.

In fact, the guests are assigned this only room on request. After several guests reported experiencing paranormal activity in that room, the hotel staff decided to close the room for the public, unless specifically requested.

Unusual voices, troubling dreams, open tap, and ghostly figures are some of the events experienced by the guests who have stayed in room no. 712.

The room remains closed always. Recently, many guests residing in this room reportedly felt a strange sense, as if someone is present in the room.

Some said they had trouble sleeping or had encountered sleepless night.

For some, it was the furniture that didn’t let them sleep since they kept moving on its own in the above room, regardless of the room being empty.

Even the cleaning staff goes in a pair in order to clean the room. During the time, they avoid being alone in the room with the paranormal events reported in the recent past.

The reports comprise furniture altogether in the core of the room, hearing strange voices in an empty room. Some claimed to have seen spectres.

Legend of Parador of Cardona

The history behind such phenomena is related to a sad story that dates back to the 11th century. A young woman named Adales fell in love with a Muslim man.

However, her father didn’t accept their relationship and locked her away on the Minyona Tower where she passed away in vain.

Her soul still roams the area and is accountable for all the strange events that several have encountered in 712.

Whether you are here to experience the paranormal events yourself or just to visit the site, there is one thing for sure you would enjoy your trip to Parador of Cardona Castle.