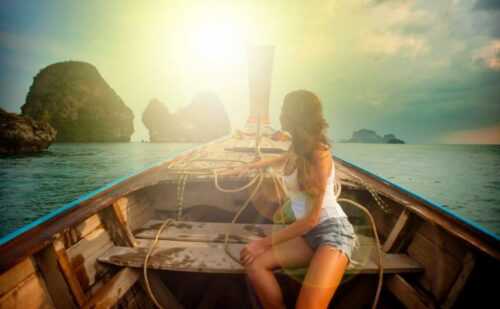 The four islands Pitcairn Islands proper, Henderson, Ducie and Oeno are a group of four Volcanic islands are scattered across several hundred miles of ocean and have a combined land area of about 18 square miles which is around 72km2.

In the South Pacific Ocean, the four islands are the sole British Overseas territory.

Henderson Island constitutes around 86% of the total land mass that these four islands possess.

The colonization of the islands by the Polynesians (people who are native to Polynesia, a huge area in the Pacific Ocean) scripted the history of the Pitcairn Islands.

The people from Polynesia established a culture that flourished for four centuries and then vanished.

They lived on three lands viz Pitcairn and Henderson Islands, and on Mangareva Island 540 kilometres (340 mi) to the northwest, for about 400 years.

As per the immigration policy anyone wishing to settle on Pitcairn, the person or individual must have evidence of savings or assets of at least NZ$30,000.

In 1790, nine of the Englishmen from the Bounty led by Fletcher Christian, along with the 18 native Tahitian men and women settled on the Pitcairn Islands and set fire to the Bounty.

While talking about this place there is one more thing that happened here, the Pitcairn sexual assault trial that took place in 2004 against seven men who were living on Pitcairn Island.

These men were accused of having 55 charges for sexual assault against young people and children.

The accused represented a third of the island’s male population and included Steve Christian, the mayor (he remained the mayor of the place for around 5 years starting his tenure in December 1999 and ending it in October 2005.

One of the defendants amongst them was found to be guilty of at least some charges that were against him as on 24 October.

Apart from him, another six accused men were living abroad, amongst those Shawn Christian who is currently the mayor of Pitcairn were on trial for 41 charges separately in Auckland, New Zealand somewhere around 2005.

In 2004, half the island’s adult males, direct descendants of Christian and the mutineers, were charged with the rape, indecent assault of underage girls and, in one case, incest.

After a five-year investigation by British detectives, during which every woman who grew up on the island since 1950 was questioned, 32 women said they had been abused.

Thirty-one men were implicated in the crimes, some of which occurred at least 40 years earlier.

Of those 31, many now dead, seven men were tried in a court presided over by three New Zealand judges. Only one was acquitted.

The world’s most remote museum has opened on Pitcairn Island, Britain’s last outpost in the Pacific Ocean.

The museum is part of a £2 million investment by the British government to revive the flagging fortunes of Pitcairn, which lies between New Zealand and South America.

The museum was initially in a School building but was moved to a separate building in the year 2005.

The wooden building will exhibit cannonballs, an anchor and a swivel gun from the Bounty, the Royal Navy ship hijacked by mutineers led by Fletcher Christian and sailed to uninhabited Pitcairn in 1790.

Pride of place will be given to a Bible owned by Christian, which to prevent the pages sticking has been preserved by islanders turning its pages weekly.

The opening of the museum at the weekend is the culmination of a saga in which the building’s raw materials were twice transported across the world before finally reaching their intended destination.

One of the uninhabited members of the Pitcairn Islands enclave is the Henderson Island situated in the South Pacific Ocean.

The remote location and unsuitability for human habitation have made this island a subject of scientific study.

About ten of its 51 flowering plants, all four of its land birds and about a third of the identified insects and gastropods are endemic – a remarkable diversity given the island’s size.

The island was previously considered one amongst the world’s last two raised coral atolls whose ecosystems remained relatively unaffected by human contact.

Although, in a research that took place in 2017 clearly depicted that a lot of plastic debris got accumulated on the island.

The island is a small piece of land measuring about 9.6 km by 5.1 km and had a total surface area of 37.3 square kilometres.

The Island is located around 193 kilometres northeast of the Pitcairn island and around 5,000 kilometres from the nearest large land mass.

A bright strip of sand surrounds a pale blue lagoon and the remnants of one of the four volcanic peaks on Oeno Island.

Sitting approximately 280 kilometres northwest of Pitcairn Island in the South Pacific, Oeno is a prime example of a tropical island in the middle stages of its development.

Adamstown has a population of 49, which also is the entire population of the Pitcairn Islands. Every other island in the group is uninhabited.

Adamstown is the place where majority residents drink, eat and sleep, as they use the other areas of the island to grow food.

The city of Hamlet is the second smallest capital in the world. It has to access to modern television entertainment, satellite internet, and a telephone;

however, the main means of communication remains the ham radio. According to Google Maps, the only named road in the capital city of Hamlet is called “The Hill of Difficulty”.

Oeno Island is also termed as the Holiday Island. The Birdlife International has identified the island as an Important birdlife area or the IBA as the island hosts around 12,500 pairs of Murphy’s petrels, a kind of sea bird.

All these facts will surely help you to visit this place with even more interest.

I hope this article helped you to explore every possible side of this island. Do share your experience on the same through the comment section below. Thanks!