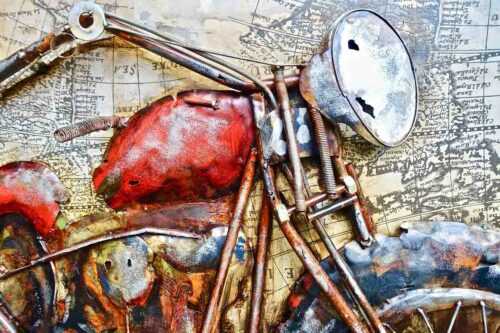 It’s a temple of a regular rider who died in an accident. Yes! You read it right. It’s a temple built after a “human’s” death.

Bullet baba whose real name was Om Singh Rathore died in an accident on December 2nd, 1988.

While he was traveling from pali to Chotila, he lost control of his bike and hit a tree where he died instantly. His bike fell into a trench.

The police again brought the motorcycle to the police station. But, this time they chained it and emptied the fuel tank so that whoever stole it last time won’t be able to steal it again.

Despite their attempt at preventing the bike from moving/stealing, the bike disappeared from the police station again and was found at the same spot. Locals said that om Banna’s motorbike kept returning to the same spot where he died in the accident.

No matter, how many times the police tried keeping the bike in their possession it was always found at the same spot every other day.

This incident attracted the population resided there. The people saw it as a miracle and soon started worshipping the bike. Soon, a temple was built in a memoir of “Om Banna” and his bullet after being convinced of the miracle.

The term “Banna” in the name of “Om Banna” is known amongst the Rajput of Rajasthan as a boy or newly-wed groom. The temple is also called a bullet baba temple.

Om Banna is of no doubt is a made-up god by the people. But the temple is just like any other temple.

The temple became widely popular; they had to relocate the shrine a few meters away from the highway due to its increasing amount of visitors every day. The bullet baba temple also has a full-time priest.

People believe that one must pray to om Banna for a safe trip before they start moving. Some even stop just to have his blessings for a safe journey, and those who do not do so, likely to have a dangerous journey or as the legends say so.

The bullet is covered in a glass box. It is believed that the spirit of bullet baba helps travelers who are suffering.