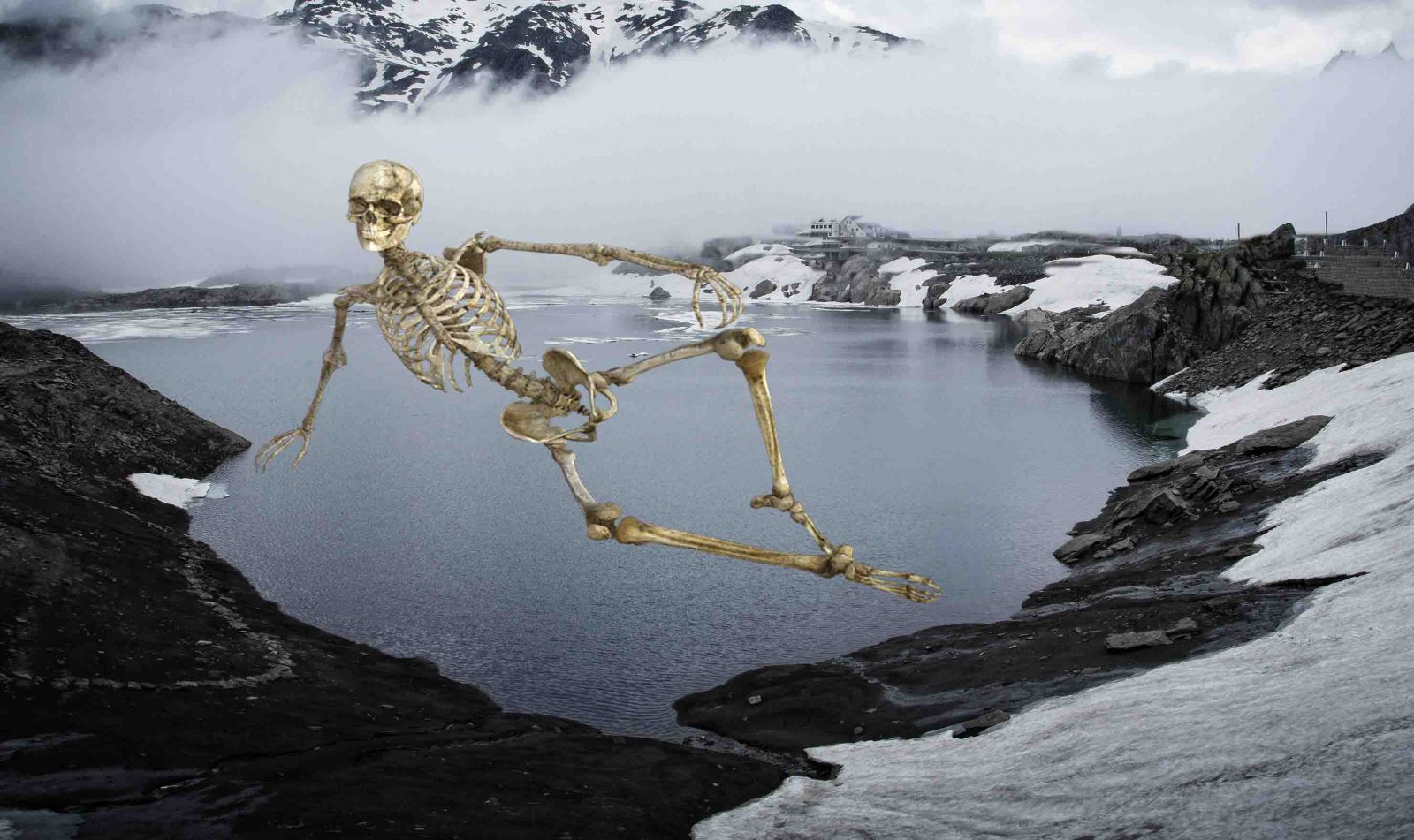 Roopkund is a glacial lake with an altitude of 5209m located in the state of Uttrakhand, India. It rests in the lap of Trishul massif. Roopkund Lake is locally known as skeleton lake or Mystery Lake.

The reason why the mystery lake called the skeleton lake by the locals is that it remains of human skeletons found at the bottom of the lake. This skeleton lake has a little depth of 2 meters max.

The site is immensely popular among those who seek adventure on their trip. Roopkund Lake is also famous for its trek. You will find many trekking routes on the way to Roopkund.

The place gives you two advantages at once. One is its scenic view, and second is the tempting surrounding of the skeletons.

The most prominent reason as to why the Roopkund trek is a must for every trekker is the beauty of Roopkund.

Almost every trekker you’d meet would say the same predictable things. But only a few trekkers could describe to you what this trek is famous for?

However, there are many trekking sites in our country that are ideal for beginners even if the altitude is high as the Roopkund trek.

There are little chances of getting lost as the trail is broad and well-planned. You don’t even need to have a guide there with you while trekking.

If you strictly follow our Roopkund blog, you won’t need any guide. You will need the guides only when you have to cross the snow patches on your last climb.

Roopkund is filled with many unique things. One of them is the oak trees over wan. Most people don’t know that these oak forests are the densest in India. They are mostly untouched by humanity. And, each of these oak forests is over 500 years old.

There is twin grassland of Ali Bugyal and Bedni Bugyal which are the largest high altitude meadows in India. You will be spending 2 and a half days here-a a fact that is missed by many. Each moment spent here will turn out to be a golden moment in your lives.

Unlike Roopkund, not all treks would give you such a great feeling. The thrill is HIGH! Those who succeeded in climbing Junargali– which is of 16,000 feet high, break down in tears of joy.

If you’re planning to visit this place go for it, you’ll surely won’t regret. The best time to visit Roopkund would be in the month of May-June or after the monsoon, i.e. Aug-Sep.

The difficulty level depends upon your physical health. It’d easy for you to trek if you have prior experience in trekking. Junargali and Roopkund considered tricky trek sometimes.

Plus, an additional fear of Acute Mountain Sickness (AMS) is also there. These two reasons make it difficult to trek sometimes. However, if you have engaged yourself in physical activities before, then this would be easy for you.

The skeleton lake reveals the remains of human bones, upon melting the ice, every year. Numerous Researches took place to figure out the identities of the people, where they were from, what happened to them but couldn’t get to the conclusions. And the skeleton lake mystery, to date, is a mystery.

The first time the skeletons came to light was in the 19th century. But the bones re-discovered by H K Madhwal in 1942. He discovered the skeletons (few of them) when the lake was frozen.

As the ice started melting in summer, more skeletons could be seen at the edge of the lake. When the discovery happened nobody knew whose remains it could be or how did they die?

Since the discovery occurred during the time of World War II, many speculated that the remains are of soldiers who fought in the war.

A team of investigators went there to determine the remains. Upon investigating, they quickly concluded that these bones were too old to be from the current war.

Another investigation on the skeleton lake made it evident that the lake has more than just skeletons. They found jewelry, leather slippers, wooden artifacts, and iron spearheads.

The Oxford University’s Radiocarbon Accelerator Unit organized radiocarbon dating on the remains. And the team came out with a conclusion that the remains are from around 850 AD. Without any further evidence on history, it said that they were traveling.

But, the cause of their death is still unknown. One theory even suggested that their bodies deposited in the lake as an outcome of glacier movement and they did not die at the lake spot.

According to the folklore, the king of Kanauj Raja Jasdhaval was traveling with his pregnant wife, Rani Balampa. They accompanied by a dance troupe and servants on a pilgrimage to Nanda Devi temple.

The Nanda Devi shrine held only once in 12 years. On their way, the entire group caught under the grip of a sudden, violent hailstorm. The hailstones were so huge that it killed the whole group as they couldn’t find any place to hide whatsoever.

For the longest time, the story remained a tale. But in 2013, the story found some validity upon the claims made by the folklore.

The researchers found out the cause of death, and it concluded that they did die because of a hailstorm because signs of heavy blows on neck, shoulder, and head revealed upon careful study.

As no other sign of wound mark found on other parts of the body, the legend viewed it as the most reasonable explanation.

Today, the conservation of skeleton lake is of a big concern. Many trekkers visit the lake to see the remains and some of them often take part or the whole of skeletons as a reminiscence of their visit.

Preservation of such remains is necessary, as further research might explain more about the remains and the cause of their death.