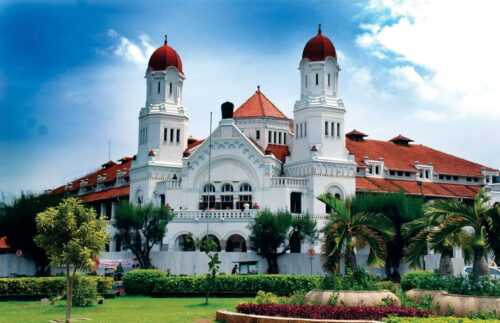 Lawang Sewu is a beautiful building that is considered the most haunted landmarks in Indonesia. It comprises the package of knowledge and witness to the past.

It is regarded as the most wonderful and must-see of Semarang. Also, this place is considered to be a great one to introduce history to the children and adults as well.

Moreover, this is a clean and comfortable place to amaze all of the visitors when they are going to count the doors and windows inside the building.

Also, besides all this, this place also serves as a marvellous one for taking photos with famous buildings.

It is recommended to visit the super artificial building in the morning. So be creative with your cameras so that you can discover the best perspectives and angles for taking your photos.

Even the visitors are going to find many photogenic scenes when they will visit the upstairs of the building.

The main building is a complete pack for providing the knowledge of the past where all the material was imported from Europe. It is a must visit place if one has a keen interest in knowing the history.

There is no doubt that the ancient and abandoned buildings have a high tendency to inspire with many of the myth and tale stories.

There are many kinds of myth and haunted stories that are based on the origin of the building, its owners, and people visiting the place, and so on.

Also, Indonesia itself is a home to different kinds of historical and mystical buildings that are antique as well.

Also, one such building in Indonesia is Lawang Sewu which was built between the years 1904 and 1907 by the Dutch.

The building has many doors that contain numerous sections, doors, rooms, arcs. Also, the basement is in building B which was taken by the Japanese army.

Many people had told that the Japanese military was used to torture and execute people poorly in the B building as it was turned as the house of prisoners.

There was a room where the Japanese were used to cut the head of the people, and their blood would run down to a drain. It was like a strange feeling that had made many of the visitors scary.

Even there are some of the tale stories which are just spread for the entertainment. There are many of the TV. Shows which are shoot in the building for the enjoyment of the people.

Many people also wonder that they had captured the ghost in their cameras. The building is nothing less than a dimension which has given the creeps to many of its visitors.

Where is Lawang Sewu Located?

Lawang Sewu which is mainly famous as a haunted house is a landmark in Semarang which is Indonesia. It was built as the headquarters of the Dutch East Indian Railway Company.

Cosman Citroen designed the colonial-era building in New Indies Style which was strongly influenced by the design of Berlage.

In 1942, the basement of the building was turned into a prison when the Japanese army had taken that building for their use.

However, then after the war, the Indonesian army took over the Lawang Sewu back. Soon, the building underwent renovations to make sure that this wonderful building will serve as a profitable for tourist attraction.

It was hoped as the main attraction for tourism in Central Java. Even in late 2013, the elimination of the “spooky image” of the building was done to attract more tourists.

Also, now, Lawang Sewu has become the most exciting and attractive places visited by an average of 1000 visitors daily.

Where is Lawang Sewu Semarang?

Lawang Sewu which has almost a thousand doors is located in Semarang. It is a historical building that serves as a beautiful site for tourists.

The building comprises of two large colonial buildings that were one of the headquarters of the Indonesian railways at the era of Dutch East India Railway Company.

The empty corridors in the premises, where the engineers and clerks once worked, features a magnificent marble staircase and stained glass.

However, today many locals have made the magnificent building as a haunted house. Many of the tale stories and myths have been spread that is making the beautiful building a horror site.

However, it is fascinating to see how the electric light shines in the building through the windows with multicoloured stained glass.

Lawang Sewu is most reputed and famous for its eye-catching architecture and rich history.

When one is visiting through the centre of Semarang, then they are going to see Lawang Sewu as one of the most impressive and beautiful landmarks of the city.

The building directly means a thousand doors in Bahasa Jawa. Also, this white colonial building is enormous that is the part of the tourist route.

However, today this building is known as a haunted house that makes many of the people scared about visiting the site.

There are many of the faces in the building. It offers a romantic outlook from the front and has a frightening backside which consists of spacious deserted rooms inside the building.

The basement of the building is partly under water due to a unique cooling system that makes it inaccessible.

It is better to see the different atmospheres of the building, but it is preferred to visit the building at the end of the evening or the start of the day.

“A path of colonialism” Lawang Sewu is an old and beautiful building. It is a marvellous place for taking many pictures and sight-seeing. Once people go there, they will surely have an unforgettable experience.

“Night experience of Lawang Sewu” visiting Lawang Sewu is much more enjoyable at night as compared to the day.

Moreover, if the visitor had hired a good guide then surely they are going to know about the history of the place in deep.

Lawang Sewu is one of the beautiful and majestic sites that serve as European architecture and take the significant parts behind the independence history of Indonesia. 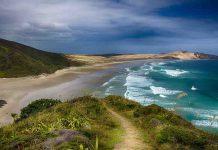 Where You Should You Go On Next trip to New Zealand in the Summer!