A skinwalker ranch is an eerie place, which is the birthplace of monster tales, alien spaceships, and other strange events. People who are wondering what is the skinwalker ranch location; it is located near the small town of Ballard, Utah.

The area is approximately the size of 500acres. A native of the district believed evil creatures called skinwalkers infest the ranch. Many claimed to have seen UFOs, unexplainable lights, crop circles.

The Sherman family lived there for two years and described numerous strange events, including animal mutation and disappearances of animals and numerous UFO sightings.

Moreover, the skinwalker ranch photos on the internet would probably provide your skeptical mind with some proof of this bizarre phenomenon. Questions’ regarding the skinwalker ranch evidence, the Sherman family has enough incidents to share, that we think are enough for you to believe in the existence of such occurrence.

Few skinwalker conspiracies indicated that the government made contact with the aliens and is concealing the fact. Other theories suggested that the area is home to a gateway which is close to the Hellmouth that enables inter-dimensional travel.

Skinwalker Ranch Story by the Shermans

The Sherman family reported that many of their cows were butchered. One of the cows didn’t show any signs of injury or bleeding other than a hole pierced through its eyes.

Other cows found sliced up with their organs or body parts removed carefully. In every one of these cases, the Shermans didn’t see any blood.

With cows, six of their cats vanished without any trace, and ranch dogs feared an unknown presence.

According to the legends, right after the Sherman family moved to the skinwalker ranch, they were approached by a vast, friendly wolf. Not long after that, the wolf attacked a calf, causing the rancher to hit the wolf with a stick.

He shot the wolf twice, however, nothing happened to him; he even shot the wolf several times with a hunting rifle; still, nothing killed him. Eventually, the wolf left, and the rancher followed him, which concluded as if the wolf never existed.

Sherman family told on a radio show Coast to Coast Am that they spotted a blue orb on their property. One of the instances involved the father who set three dogs on the orbs; however, the orbs escaped from them every time they approached, that leads the animal going farther away from the ranch.

Once they go out of sight, they could hear dogs yelping but couldn’t gather the courage to find them. The next morning they went to investigate and found three circles of burnt grass with a slimy substance in the middle; it is the remains of the dogs- they assumed.

The Shermans also reported the poltergeist activity shortly after they encountered with the skinwalker ranch wolf. According to a section on Coast to Coast AM, the mother of the Sherman family said that it often happened whenever she came from the market with the groceries.

She unpacks them and later finds out all the foods are in the shopping bag all packed. They also claimed to miss and moving of objects.

For instance, the hairbrush found in the freezer when it was last seen on the bathroom counter. They heard voices in languages they couldn’t fathom and sighted shadows in the house.

A Portal to Another World

Few claimed to have seen a mysterious portal that appears in the form of bright orange & blue light that lasts only 10 seconds and drift 500-1000feet in the air.

The theory behind the lights is that the orange portal enables the creatures to pass in and out of our world from another side, while the blue portal permits vehicles to pass.

It might sound crazy, but if this has even a little possibility of being true, it could explain the werewolves and muscular hyena encounters and them vanishing from the spot.

The Sherman family described encountering various bizarre animals that included a beast as well that look precisely like a hyena on steroids.

According to George Knapp, a journalist, Sherman saw the creature when it was attacking their horse; however, as he went closer, it vanished leaving his claw marks on his horse’s leg.

This same creature may have been seen by other people as well.

According to skinwalkerRanch.org, out of all the encountered entities, the Dark one is sporadic. This creature could be a human witch doctor trapped in another timeline.

Those who have claimed to see the Dark one describe him as a Native American, coming through the portal to another world. Some even believe that he’s the one who opened the portal.

The Shermans frequently found crop circles designed in a triangular pattern. They never found out who drew these; however, it would be improbable for them to miss any human sneaking up the lonely road leading to the ranch.

UFO sightings are most common, yet an extraordinary phenomenon to occur in skinwalker. The Sherman claimed that they saw many unexplained aircraft with blinking lights and heard voices speaking an unearthly language.

Furthermore, countless cattle were butchered during their time of living on the ranch.

According to the daily beast, a teacher named Joshua Hicks asserted to have encountered a UFO, and believe that half of the local population have seen the UFO as well.

In this documentary ‘ Jesse Ventura conspiracy theory skinwalker ranch ‘ he said that the government knew about aliens, but didn’t have enough proof to prove their claims.

However, after the Shermans, Robert Bigelow bought the property and found the evidence of the existence of aliens; he even had contact with aliens.

Robert bought the ranch after reading an article on strange phenomena in the area by journalist George Knapp.

George Knapp skinwalker ranch documentary was in collaboration with NIDS deputy administrator Colm Kelleher in which they wrote a book as well that called Hunt for Skinwalker.

The ghost adventures skinwalker ranch aired last year on television wherein team took special permission from the Navajo Nation to inquire into the skinwalker ranch, where people do not to enter in fear of confronting shape-shifting beings.

A Movie is also created on Skinwalker Ranch Here is the review: Movie 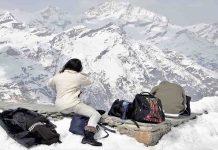